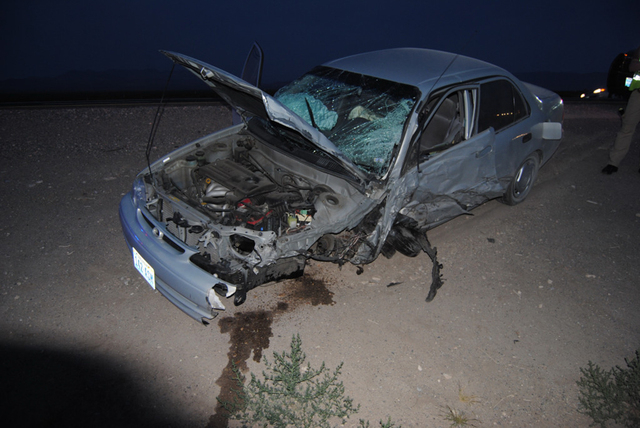 The unidentified victim, a 54-year-old male according to authorities, was not in a crosswalk while walking southbound across Highway 372 and Linda Street.

Nevada Highway Patrol Trooper Loy Hixson said the man, who appeared to have identification out of California, was struck by an older model dark pickup truck just after 11:30 p.m.

“After the pedestrian was struck by the pickup, the driver continued on and left the scene,” he said. “The preliminary investigation shows the pickup was traveling eastbound on State Route 372 at the time. If anyone has information, they should contact the Nevada Highway Patrol.”

The pickup will have damage to its right front and side and missing the passenger side mirror.

Lewis also said crews were dispatched to Highway 160 near the Tecopa turnoff after receiving reports of a three-vehicle collision just after 4 a.m. Wednesday where emergency crews from Clark County assisted in the response.

Lewis noted that the northbound vehicle was traveling in the southbound lanes at the time of the collision.

“Upon arrival we found it was actually a two-vehicle off-set head-on collision,” he said. “Apparently, one of the vehicles was traveling in the wrong direction and NHP is investigating. The vehicles struck head-on and one person was transported from the scene, while the other declined transport. It was a significant impact collision.”