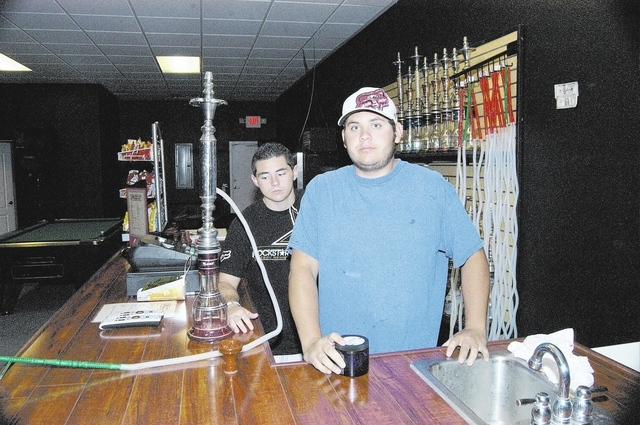 The owners of the Dragon’s Cloud Hookah Lounge at 3370 S. Highway 160 will receive a warning from the Nye County Liquor and Licensing Board after minors were caught serving alcohol recently.

The board, consisting of the five county commissioners and the sheriff, had a show cause hearing last week on whether to suspend or revoke the liquor license for AJ’s Adventures LLC dba Dragon’s Cloud Hookah Lounge. Alfred J. Belluomini Jr. and Andrew Jordan are the liquor license holders.

Belluomini took out a town business license for the hookah lounge in July 2012. It caters to the younger crowd who don’t have a place to hang out. Hookah lounges have become popular in this country recently, and are patterned after the Arab tradition of smoking flavored tobacco from a communal water pipe. The Pahrump Regional Planning Commission approved a conditional use permit to allow Dragon’s Cloud to begin selling liquor in a neighborhood commercial zone last March.

Callie Stark, who handles liquor licenses for the sheriff’s department, in a memo to commissioners, said grounds existed for suspension or revocation.

Sheriff Tony DeMeo said Dragon’s Cloud Hookah Lounge already had a liquor license, but the bar section of the business wouldn’t be open for five or six more days when there was to be an official ceremony. Deputies checked out the establishment last month, after cars were seen pulling in and out.

“Deputies did a routine check. They were open as far as the hookah side of it but they weren’t open as far as the alcohol side of it. The deputies noticed they were selling alcohol, requested identification of the individuals being served alcohol, turns out they were under the age of 21. Then they also ID’d the person serving alcohol, that person was also under the age of 21,” DeMeo said.

“When the owner found out about the violation he did call me and apologized and stated it wouldn’t happen again,” the sheriff said.

Commissioner Lorinda Wichman asked DeMeo for his recommendation. The sheriff said he at least would want a letter from the commissioners advising the owners this is something they take very seriously.

“My opinion was he was obviously concerned and he did not condone what had happened,” DeMeo said.

The sheriff indicated the attitude of the owner and employees, in cooperating with sheriff’s deputies instead of being confrontational, helped lead to his recommendation to just give a warning.

“The next time it would be something we would look at taking the license off the wall by the Nye County sheriff’s department, which I could have done and also bringing it in front of the board for a show cause hearing,” DeMeo said. “His concern and the fact that the employees and no one in there gave us any difficulty was one of the reasons this was brought before the board to dispose of.”

Commissioner Dan Schinhofen voted against the motion. He was upset the owners didn’t show up at the show cause hearing. But Schinhofen admitted as a former employer — he owned a landscaping business in California — that employees don’t always understand the severity of the rules of their employer.

Stark said a certified letter was sent to the owners Oct. 3, but the sheriff’s department received no proof it was picked up. DeMeo said when nothing is returned, he assumes the letter was delivered. District Attorney Brian Kunzi said he felt the owners were properly notified of the hearing, it’s their choice whether to show up or not.

Commission Chairman Butch Borasky said, “In this letter it should be stated if he ever comes before this board I’m not going to be sitting here and just saying you made a mistake.” He referred to the case of Su Mesa Mexican Restaurant, where owners had their liquor license suspended for 60 days in January 2008 after a raid, following reports there were after hours parties with minors drinking alcohol.

“They have a license from the board and they also have restrictions based upon building and planning that they can serve only beer and wine. The idea was to try to bring people of an older age there. They’re not allowed to serve it. By law they have to make some type of a barrier. Casinos do it by the color of their carpeting,” DeMeo said. “The employee took the initiative to engage his friends in some alcoholic beverage outside of the owners’ knowledge.”

Schinhofen asked if the owners were present when the liquor was being sold, DeMeo said they were not.

Commissioner Donna Cox asked if there was any money exchanged, or just a couple of young people having a drink.

“Since they were actually closed they weren’t running a business,” Cox said. “Are you allowed to cite them for something not going on?”

DeMeo said it didn’t make a difference whether money exchanged hands or the business was officially open, the person serving and consuming alcohol were both under 21.

Commissioner Frank Carbone wanted the owners to be warned they could lose their liquor license in the future.

“And underline the word ‘could’,” Borasky added.

“We will point out the consequences of any further violations,” DeMeo said.