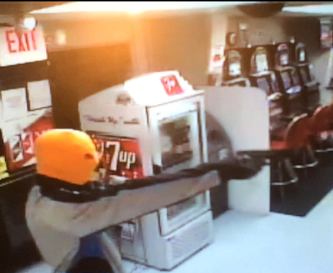 Nye County Sheriff’s deputies are seeking information on the valley’s fourth armed robbery of a business in less than a month.

The latest occurred early Friday morning at the Horizon Market at Bell Vista and Leslie Streets just after 1:30 a.m.

The holdup was the second at the store in less than a month.

According to the arrest report, an unidentified male entered the store with a handgun and took undisclosed items from the establishment.

The robbery, detectives say, appears to be similar to the three previous hold ups where the suspect entered the store with a gun and demanded money.

No employees were harmed in any of the crimes.

Friday’s armed robbery occurred roughly two weeks after two other local businesses were robbed on the same evening this month.

Detectives said the Kentucky Fried Chicken at Highway 372 just west of Highway 160, and Horizon Market, less than a mile west of the restaurant, were robbed by two armed men just after 10 p.m., on Oct. 12.

“Upon our arrival, the two subjects in question were gone,” he said. “We’re still working on some strong leads and we are just processing them as we go. We were informed that both subjects were carrying handguns, but fortunately, no one was injured.”

The robberies follow a Sept. 30 robbery of the Horizon Market at 2030 Bell Vista Ave., by a man brandishing what appeared to be a shotgun where he demanded money from the clerk and fled the area.

Murphy said detectives are trying to determine whether all the crimes were committed by the same individuals.

“We are still processing that incident with the sheriff,” Murphy said. “At this time we’re looking at whether all of the recent robberies are connected.”

Anyone with information is encouraged to contact the Nye County Sheriff’s Office Detective Division at 775-751-7000, or email nsco_detectives@co.nye.nv.us.