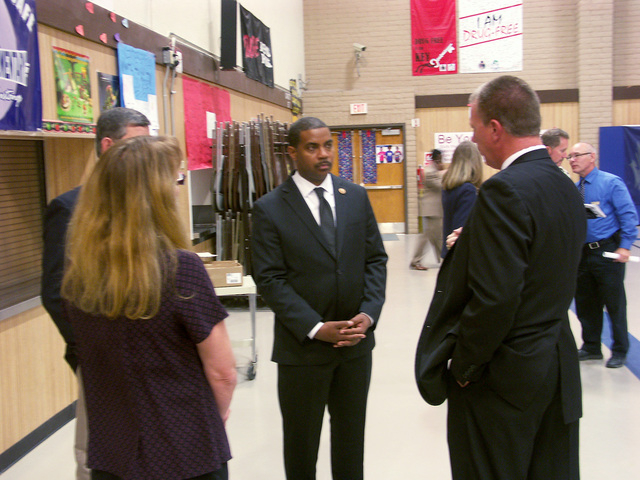 Nevada Congressman Stephen Horsford made a visit to Pahrump on Thursday.

The Democrat met with Nye County School District Superintendent Dale Norton and other officials to discuss the Summer Food Program.

Horsford said he was troubled by the fact that many school-age kids in the valley have little by way of a nutritional breakfast, lunch and dinner during the months that school is not in session.

“It was an opportunity to listen to local leaders about some of the issues around the food assistance program where Pahrump is actually the model for what’s being done for children who qualify for free and reduced lunches for the school year. When they are on summer break, those same kids typically don’t have a place to go to get a nutritious meal,” he said.

Horsford noted that schools within the community will see an increase in funding for the program.

“Here in Pahrump, working with the different programs, they have increased their participation by 36 percent in just the last year. Based upon what they are looking to do in the summer, there’s three sites that are being put together which includes a local park. It’s a model that the state is pushing for other communities. The fact that it’s happening in Pahrump speaks to the creative thinking of the leadership so that people who need this service can get it,” he said.

Additionally, Horsford said efforts on the federal level to provide more funding for the program are being examined.

“The Summer Food Program is supported by the United States Department of Agriculture. Nevada has one of the lowest rates of families and children who qualify for taking advantage of it and we were able to secure one of those grants from the USDA, to help the state improve our outreach to these families and Pahrump is doing a great job in utilizing those resources. We are here to listen to what officials here are doing, what they need and how we can help do more,” the congressman said.

The legal requirements for school selection are very prescriptive and require that schools with the highest level of free and reduced price enrollment receive priority in selection.

The application process must be conducted yearly; however, returning schools do not have to submit a new application each year.

Officials say all schools should be operating the Fresh Fruit and Vegetable Program, which started in 2008, as soon as the new school year begins.

At present, seven elementary schools in Nye County are benefiting from the program. Pahrump has 330 students identified as “homeless” by district officials.