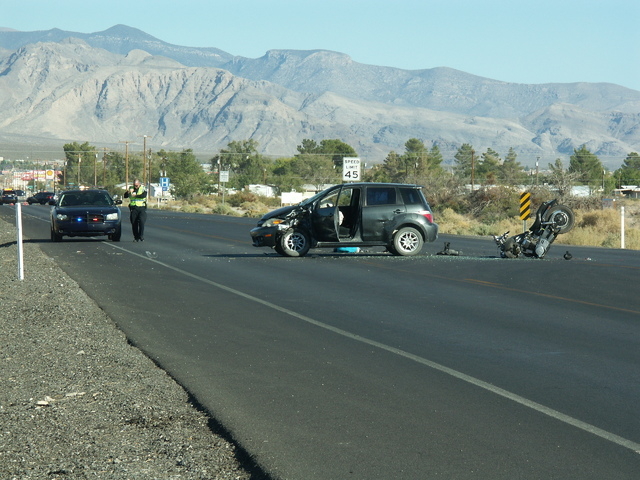 A motorcyclist killed Friday afternoon has yet to be identified by officials.

The man was on a Suzuki motorcycle traveling eastbound on State Route 372 near Linda Street when, according to law enforcement, a Plymouth Scion hatchback on Red Rock Drive pulled out in front the motorcyclist just after 2 p.m., authorities said.

The victim, described by authorities as an approximately 40-year-old male who was wearing a helmet, was airlifted to University Medical Center in Las Vegas where he died of his injuries. The Clark County Coroner’s Office had not yet been able to identify the victim as of Tuesday afternoon.

Rivera said the driver of the car was transported to Desert View Hospital for evaluation. He did not say what charges, if any, may be filed against the driver, or if the motorcyclist was speeding.

“We haven’t had a chance to fully talk to her,” Rivera said Friday. “She was shaken up.”

The name of the driver, or any information on pending charges, has not been released.