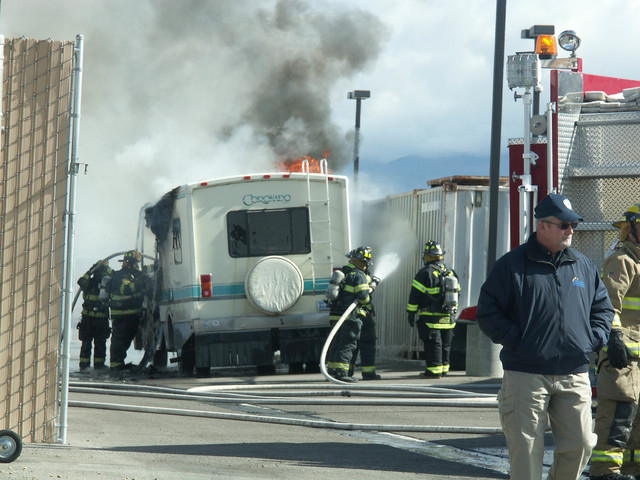 An RV at the Nye County impound yard burst into flames after the person jump-starting the vehicle put the cables on the wrong posts.

Pahrump Valley Fire and Rescue crews responded to the facility along Siri Lane just after 8:30 a.m. Friday after reports of an RV fire.

The 1994 Fleetwood Coronado, fully engulfed in flames, was parked inside the secured lot near a half dozen additional vehicles and storage units when fire crews arrived.

Though no injuries were reported, Fire Chief Scott Lewis said the vehicle was parked near one storage unit containing evidence seized by Nye County authorities for criminal cases.

“We’re in the investigative stage and it’s leaning towards an accidental fire,” he said. “It was in close proximity to numerous vehicles in the impound yard,” he said. “The main focus was a direct fire attack while protecting exposures. A mechanical issue developed as a result of the people working on it. The vehicle is a total loss.”

Lewis also said the facility is adjacent to Nye County Emergency Services, who were prepared to assist the fire department in containing the fire.

“We’re working very closely with the sheriff to determine what we need to do and how we need to do it,” he said. “Since it was directly next door to Nye County Emergency Services, we did have a county engine come over and assist and augment our crew and that worked out really well.”

The vehicle appears to have an infamous past, according to its owner who chose not to be identified.

The RV was impounded several months ago as part of evidence related to a local child lewdness case where the crime, according to the owner, occurred in the RV.

The Nye County Sheriff’s Office had just released the vehicle back to the owner who was attempting to jump-start the RV due to a dead battery.

She noted that the person inadvertently attached the jumper cables to the wrong battery terminals.

“Apparently we connected it wrong and crossed them,” she said. “It started smoking inside, but the fire extinguisher inside the motorhome was empty, otherwise I think we could have put it out. It just spread. It’s a total loss.”

The owner said she had planned to sell the RV once she regained possession from the Sheriff’s Office, but as fire crews worked to extinguish the flames, she appeared to resign herself to the RV’s ultimate fate.

“Based upon its history, it’s probably best that this happened today,” she said.

There were no reports of injuries.