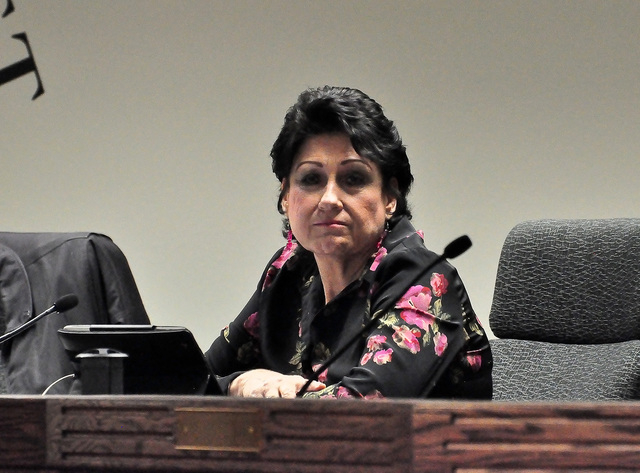 Incumbent Nye County commissioner Donna Cox is seeking re-election this year and she faces some competition in District III.

Cox, who was first elected in 2012, will compete against four other candidates in the June 14 primaries.

“I run because I enjoy my job,” she said.

Cox, a lifelong resident of Nevada, said she is an advocate for protecting wild horses and getting rid of the BLM.

“I’m always there for the little guy, the guy that needs help.”

Many of Cox’s contenders said Pahrump doesn’t attract enough businesses and said they want to make the town more business-friendly.

“Our job (as commissioners) is not to bring in business, that’s better left to people like the (Pahrump) Chamber of Commerce, that’s what they are there for,” she said. “(Our job) is to remove the obstacles that prevent business from coming which we have to do on a pretty steady basis.”

“It’s unrealistic to say that we are not attracting business,” she said.

Cox spoke against putting meters on domestic wells, a part of the proposed Basin 162 Groundwater Management Plan that has spurred numerous debates at public meetings.

“I definitely do not support putting meters on wells, I don’t care if they are old wells or new wells,” she said.

Instead, Cox said Pahrump should collect taxes on water rights: “So that would be a new source of revenue.”

Cox said she supports commercial and industrial developments that don’t use a lot of water, but doesn’t support residential development.

“Let’s face it, the reality is, if we don’t have a lot of water we cannot sustain a lot of people living here,” she said.

“We are short on water, so what we would like to encourage is business that comes in that would be water-conservative businesses. In other words, we don’t need housing projects with 10,000 people. We need a company that would come in and employ a moderate amount of people and bring a lot of money,” she said.

During her time on the commission, Cox completed an extended study course at the University of Nevada, Reno. Recently, she received a Republican Principles Award from the Nye County Republican Central Committee.

If re-elected, Cox wants to continue her current work, follow through all of the priorities that she had in the past and work on new issues.

“My goal has been to save money, which we have done and to consolidate departments,” she said.

Cox is currently doing meet and greets as part of her campaign in Pahrump. She is soon planning to put up signs across the town.

Dodd is running in Nye County’s District III against Nye County Water District Governing Board Chair Greg Dann, businessman Leo Blundo, and Pahrump residents Antheny “AJ” Dodd and Louie DeCanio. The candidate receiving the most votes in the June 14 primary will be placed on the General Election ballot unopposed. No Democrats or small-party candidates filed.