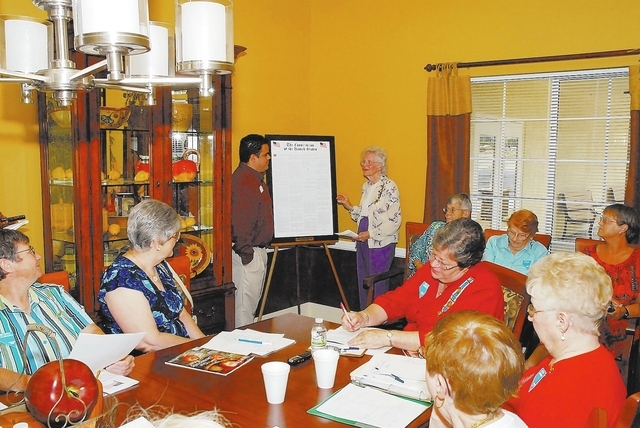 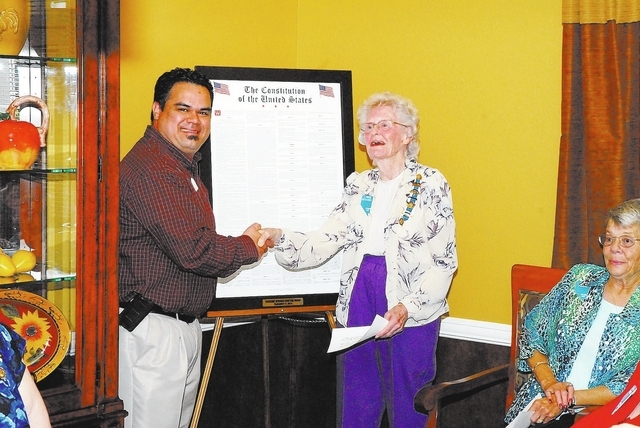 Inspirations Senior Living facility was graced with the sounds of patriotic music this week, courtesy of a local organization.

Members of the Pahrump Springs Chapter of the Daughters of the American Revolution (DAR) held the first meeting of the 2013-14 season at the facility on Wednesday.

The women are descendants of individuals who fought in the revolution which freed the United States from British rule.

All are deeply involved in historical preservation.

The visit was prompted by the observance of National Constitution Week which begins next Monday.

“We are celebrating the 226th anniversary of the signing of the Constitution of the United States on September 17, 1787. It is considered to be the greatest document ever written and stands as a model of a strong national government representing different branches of government which in turn represent different interests of the people. It was my pleasure as a Regent of the Pahrump Springs Chapter National Society of the Daughters of the American Revolution to present the chapter’s gift of this document to Inspirations Senior Living for placement in this facility,” she said.

The Pahrump Springs Chapter was chartered on December 6, 2003.

The group meets the second Wednesday of each month in the Pahrump area and programs include local and U.S. history, Native American heritage, genealogy, and military service personnel.

Sepulveda said not just anyone can become a member of the prestigious society.

Interested candidates must be verified by an ancestry check.

“We have what’s called a registrar and she sits down with them and goes over the requirements to make sure they have all of the birth, marriage and death certificates that are needed. Once we have everything, we send it in. They have to get a number and get approval from the national chapter,” she said.

One prospective member, Karen Potts has put her name up for acceptance.

“As soon as they locate my mother’s birth certificate I’ll be that much closer to becoming a member. She was born in Tulsa, Oklahoma but they are not really cooperating but I’m looking forward to getting it all taken care of. I love Pahrump and I’m having a wonderful life here,” she said.

Tonya Brum, community marketing director for Inspirations Senior Living said she was pleased to have the DAR group hold their first meeting of the season at the facility.

“I was so happy they chose our facility for their first meeting and the presentation. Their regular meeting place is at the Pahrump Library,” she said

“We want to continue to do this and offer them a place to have their meetings. The building is so beautiful, we just want to share it with everybody,” he said.

Inspirations Senior Living opened in March of this year.