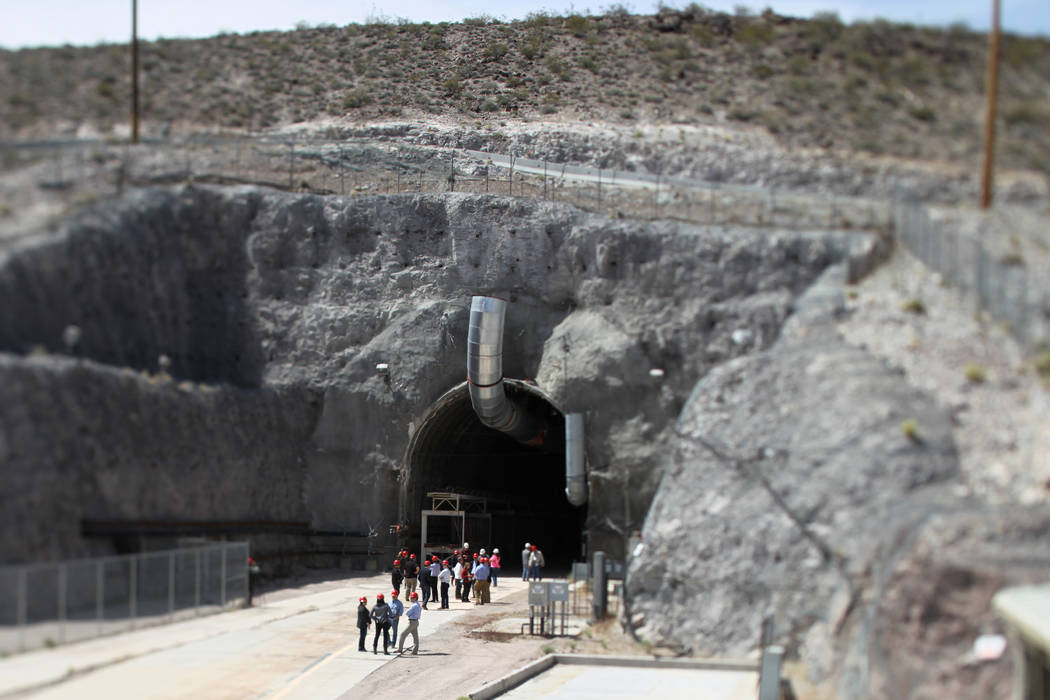 Congressional staff members, media and Department of Energy employees wait for congressmen to emerge from the north portal during a congressional tour of the Yucca Mountain exploratory tunnel Thursday, April 9, 2015. Special to the Pahrump Valley Times

Key Nevada officials threw their support behind the Assembly resolution that opposes Yucca Mountain, while Nye County Commission Chairman Dan Schinhofen urged officials not to pass the measure in its current form.

Officials didn’t take immediate action on Assembly Joint Resolution 10 at the Assembly Committee on Commerce and Labor Subcommittee on Energy meeting on Monday, where most Nevada officials voiced their opposition to the proposed repository in Nye County.

Assembly Joint Resolution 10 was introduced by Assemblyman Chris Brooks, D-Las Vegas on March 15 before the White House unveiled its 2018 fiscal budget plan for the U.S. Department of Energy that includes $120 million for the restart of Yucca Mountain licensing.

Wesley Duncan, Laxalt’s first assistant attorney, said the White House’s proposed $120 million “does nothing to transform this example of federal overreach into a good, safe or financially prudent product.”

“Because of unacceptable risk posed by the proposed repository in being that Las Vegas is a No. 1 entertainment destination on the globe, our office believes that the state’s active opposition to Yucca Mountain is important for keeping all Nevadans safe,” Duncan said.

Should the licensing process move forward, Duncan said the attorney general’s office expects more contentions added to the 218 that have already been admitted.

He also said that the attorney general’s office, in conjunction with the Nevada Agency for Nuclear Projects, is seeking through two separate budget accounts and a combined amount of $3.6 million to continue “advancing Nevada’s interests in court and before the Nuclear Regulatory Commission.”

Schinhofen was among the few people who spoke against the resolution.

“On the issue of spent (nuclear) fuel repository at Yucca Mountain, our board for years has always stood for the rule of the law and science. Until we have had a chance to hear the science that has been collected over the past 30 years at a cost of $15 billion, we will not go on record as for or against this project.”

He said the project will “provide many benefits as a multigeneration, multibillion-dollar public works project.”

Brooks who authored the resolution said Congress needs to understand “the severity of the situation.”

“For years, state elected and federal officials, conservationists and Native American tribes have all opposed any nuclear waste inside Yucca Mountain because storing nuclear waste 100 miles from Las Vegas in an unstable and unsuitable environment is incredibly dangerous, not to mention that it will threaten the lifeblood of our economy, tourism.”

Brian McAnallen, government affairs manager for the city of Las Vegas, said the recent activity in Congress indicates that Nevada is in “for a major fight.”

“This resolution and all the activities in Congress this past week indicate that we should probably double-down on those funding opportunities because we do have a major battle in front of us,” he said.

The plan to entomb 77,000 tons of spent nuclear waste in the Nye County mountain has been in limbo since the Obama administration defunded the project in 2011.