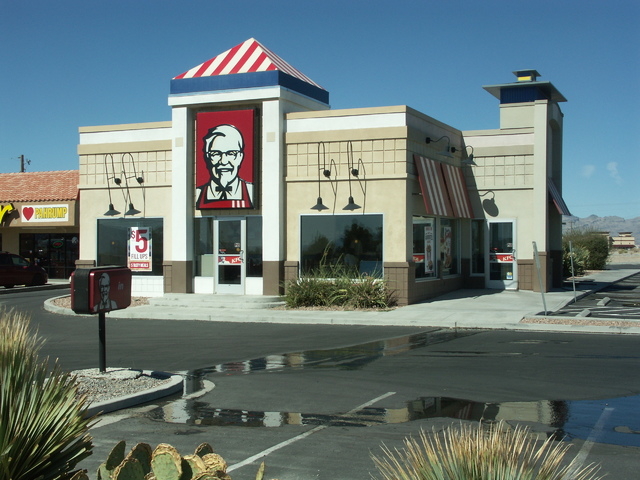 Detectives said the Kentucky Fried Chicken at Highway 372 just west of Highway 160, and Horizon Market, less than a mile west of the restaurant, were robbed by two armed men.

Sheriff’s Detective Eric Murphy said the suspects were in disguise when they entered the restaurant just before closing.

According to a Nye County Sheriff’s press release, “two males had entered the business and demanded money from the employees.”

The suspects are described as white males wearing masks and carrying firearms.

He said detectives are studying video surveillance of the robbery.

“Upon our arrival, the two subjects in question were gone,” he said. “We’re working on some strong leads and we are just processing them as we go. We were informed that both subjects were carrying handguns, but fortunately, no one was injured.”

The robberies follow a Sept. 30 robbery of the Horizon Market at 2030 Bell Vista Ave., by a man brandishing what appeared to be a shotgun.

Murphy said detectives are trying to determine whether all the crimes were committed by the same individuals.

“We are still processing that incident with the sheriff,” Murphy said. “At this time we’re looking at whether the robberies were connected.”

Anyone with information is encouraged to contact the Nye County Sheriff’s Office Detective Division at 775-751-7000, or email nsco_detectives@co.nye.nv.us.