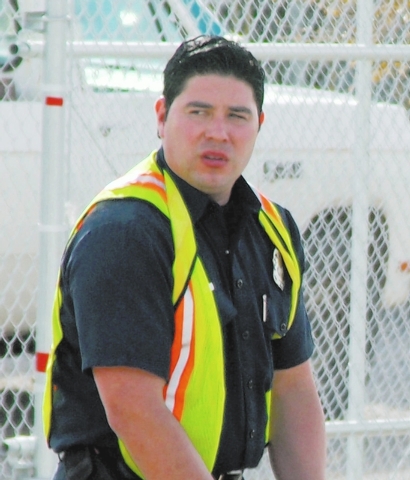 A former Pahrump firefighter is suing the Town of Pahrump on grounds that he was wrongfully terminated from his position, not once, but twice.

Campos was first let go in October 2010, but the International Association of Fire Fighters managed to have him rehired.

Roughly one year later, town officials again relieved him of his duties for good.

Rempfer said on Monday his client was fired by the town the first time without just cause after Campos was discovered using a piece of emergency equipment that he was not qualified to operate on a patient during a service call.

He also suggested that a lack of communication and organization within town protocols and procedures also contributed to what he considered a misunderstanding on the part of his client.

“Mike was fired for supposedly using a device that was out of his scope to render medical treatment but it had happened because the protocols up there are not exactly up to date. The union kind of allowed the town to reinstate Mike as a firefighter/EMT but it was in this weird position where he had no representation and he wasn’t a union member and it’s illegal to do that,” he said.

Rempfer also addressed the second occasion Campos was let go of his job, which he said included additional lapses on procedures related to the Occupational Safety and Health Administration (OSHA).

“They fired him the second time but only after he already filed a worker’s compensation claim, claiming that he suffered discrimination because he got a form of lung disease, which by the way, the county failed to give the proper OSHA inspections for its firefighters for a period time and we have documents that show that. Mike kind of upset the apple cart in Pahrump because he kept fighting back,” the lawyer said.

Strangely, this case has tentacles that go beyond the Town of Pahrump and into the City of North Las Vegas where former Pahrump Town Manager Bill Kohbarger entered the fray again.

As most local residents are aware, Kohbarger left Pahrump to accept a human resources position in North Las Vegas this summer.

It was there Rempfer recounted what must have been an awkward and completely unexpected encounter between the two in the lobby of the North Las Vegas human resources department one morning after both men were technically employees for that city, if only for a short time.

He termed the aftermath of the encounter as a post-employment retaliation against his client and noted that the timing of what transpired afterward was suspicious.

Pahrump officials, including Town Manager Susan Holecheck and fire Chief Scott Lewis declined to comment for this story. A call to former Town Manager Bill Kohbarger was not returned.

According to an account recorded in a deposition, Campos was informed of his hire on July 16, 2013, and was scheduled to begin training with the academy on Aug. 5.

The attorney said a conversation between Kohbarger and the HR official who hired Campos doomed his client’s job offer.

Campos was essentially fired a third time as a result.

“They created a human resources position for Kohbarger in North Las Vegas so he could leave the town of Pahrump. Mike had already applied for the firefighter position there and had been interviewed by HR. Mr. Kohbarger just happened to walk in while Mike was sitting in the lobby there. The North Las Vegas HR manager knew Kohbarger was from Pahrump and obviously knew Mike was from Pahrump and he asked Kohbarger about my guy that day after he left. Mike had already received an unconditional job offer from the North Las Vegas Fire Department but it was rescinded after what Kohbarger told them about Mike’s situation in Pahrump, and that’s illegal. You can’t do that,” he said.

Rempfer noted that North Las Vegas HR officials said Campos failed a background check which was the reason for his termination even though he said his client’s employment offer was “unconditional.”

Nowhere on the firefighter academy’s letter informing Campos of his imminent employment were the words “conditional” as part of his employment.

In fact, the letter’s opening greeting penned by Captain Justin Campbell of the North Las Vegas Fire Department stated the following: “On behalf of the North Las Vegas Fire Department, I would like to congratulate you and welcome you to our organization. As a trainee in the upcoming Lateral Firefighter Academy, you will need to address a few items prior to the scheduled start date of Aug. 5, 2013,” the letter stated.

None of the items that needed addressing pertained to a background check upon review of the letter.

Rempfer also had a few thoughts on the former town manager as well as the man who hired him, former North Las Vegas City Manager Timothy Hacker.

Kohbarger was laid off from his HR position not long after Hacker resigned as NLV city manager in September.

Hacker’s contentious relationship with the unions that represent city workers is well known.

NLV City Attorney Jeff Barr handed in his letter of resignation within hours of Hacker on the same day.

Rempfer noted an air of “Poetic Justice” regarding the situation.

“The fact that my client got fired and Kohbarger got fired as well as the city attorney and city manager who both resigned unexpectedly shows there’s a little bit of comic justice in the world,” he said.

Meanwhile, Rempfer said Pahrump town attorneys deny any wrongdoing on the part of the town in relation to Campos’ first and second termination.

The latter came after what is called a “Last Chance Agreement” was violated by Campos, according to the town.

“They denied they fired him because he was sick. They said that he was legitimately fired the first time and the second time he was legitimately fired based on the fact that he was under a zero tolerance policy from the last chance agreement. If he makes any mistakes, he’s fired without any due process. We disagree whether that’s even legal because it’s actually against the statues and the employee handbook. The statutes actually say you are entitled to due process before you actually lose your government employment,” Rempfer said.

Rempfer said depositions from Kohbarger revealed what he said were disturbing internal problems within the fire department and the town.

“They just wanted to get rid of Mike because of the workers’ compensation,” he said.

Rempfer said that his client is seeking monetary damages as a result of the whole ordeal.

North Las Vegas officials have yet to comment on the Campos lawsuit.