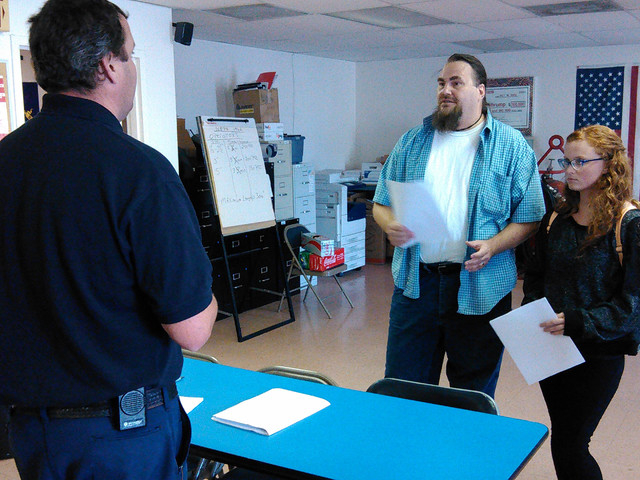 Local individuals who feel they have what it takes to meet the physical and mental demands of a firefighter may have a future with Pahrump Valley Fire and Rescue Services.

The fire department is looking for a few good men and women interested in a career as a firefighter/emergency medical technician.

The department held a volunteer firefighter recruiting drive this month for individuals wanting to learn more about a career in firefighting.

“Right now we have 27 full-time positions and we are currently a few short, but we’re actually hiring as we speak,” he said. “We are also augmented by as many qualified volunteers as we can get our hands on.”

Volunteers will be trained and cross-trained as firefighters and Emergency Medical Technicians (EMT’s), who will, after time, be able to go with firefighters on some service calls after a certain amount of training hours are completed.

“That’s mainly for safety reasons,” Snow said. “When they are in training we will let them ride as a third rider and it will allow them time to observe and watch exactly what the firefighters are doing.”

The training period depends on how long the individual sets it up for, according to Snow.

“Typically it’s both days over the weekend and maybe a day during the week,” he said. “The last time we had the training period, it lasted around 3 months.”

A large part of the training occurs in a classroom setting.

Snow said a written exam is a general knowledge test for new applicants consisting of basic math and additional materials to determine if the candidate can perform on the fire grounds.

“We don’t expect them to understand all of this stuff at the beginning,” he said. “The physical exam is a fire-based physical exam and it’s designed to test your dexterity and wear you out a little bit. It also helps us to determine whether the individual has the upper body strength to perform the job that we have to perform.”

Local student Kellie Hunn expressed her interest as a volunteer when the department held an open house earlier this month.

After speaking with a few of the career firefighters, Hunn said she’s mainly interested in the medical aspects of the field.

As a high school junior, Hunn must complete the department’s cadet program before she can become a bona-fide volunteer, if she decides.

“I eventually want to become an EMT, so going through the cadet EMS program would really help me accomplish that because I will be ahead of the game,” she said. “I am thinking about going to college and I’m also thinking about going in the military to follow an EMT career. After talking to the firefighters here, it definitely sounds like something I’d like to do.”

Hunn is not alone in her quest.

“When I was around 17 years old I actually did what was called the Explorer program for the sheriff’s department so I have the experience and I think this is a good opportunity to at least get your feet wet with what’s going on,” he said. “I’m looking for something I can do to give back to the community.”

The fire department provides much of the gear that volunteers and cadets will use.

“We supply everything that they will need,” he said. “All the candidates need is a good work ethic, a good attitude and a willingness to learn. Anything other than that we can help them out with.”

He said he also has an option.

“A career in firefighting is my top option but I’m also looking at the military,” he said. “Right now as a cadet, the nature of the call depends on whether I stay by the fire engine or whether I can actually chip in and help them get tools.”

“It’s very, very common that those who become volunteers move on to eventually become full-time firefighters,” he said. “In fact my entire executive board including myself started out as volunteers. Of course we encourage females to apply and anyone who can pass the test are all welcome.”

Snow noted there are restrictions for those with certain health issues.

“As long as they can pass everything that’s required by not only us but the National Fire Protection Association requirements, they can become a volunteer or cadet,” he said. “One of the requirements states that you can’t have a pacemaker among other things.”

Snow said those who are interested may visit the main fire station at 300 North Highway 160, Monday through Friday, 8 a.m. to 4 p.m.