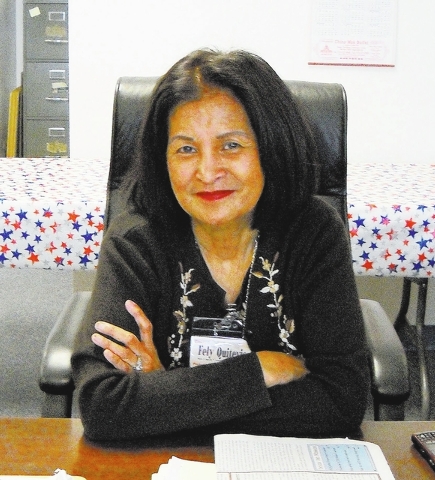 The Nye County Republican Party Central Committee announced on its website that it has requested a criminal investigation targeting Fely Quitevis, the group’s former chairwoman.

Allegations Quitevis embezzled $14,000 from the county’s GOP coffers before leaving the group in April 2012 are what spurred the request.

A report spelling out those and other felony charges was filed with the Nye County Sheriff’s Office on Jan. 17.

Quitevis was the local GOP chairman from 2007 until the NCRCC said she resigned hours before being recalled. A new board of directors, headed by Bill Carns, followed a tumultuous county convention in Tonopah, in which Quitevis said alternate delegates weren’t seated.

Only 155 of 243 delegates were seated. Quitevis said she left the meeting early fearing pistol-packing delegates. She also leveled accusations of racism.

The NCRCC claims Quitevis and previous officers turned over scant and jumbled accounting paperwork and financial records to the new board. When checks were involved, funds were well accounted for over 95 percent of the time, but in cash transactions, accountability and transparency were greatly lacking, the NCRCC said. The funds in question were from the Nye County Convention, Reagan Day dinner and a January 2012 NCRCC meeting.

“Since then a detailed forensic audit shows more than $14,000 missing, misappropriated or otherwise collected but unaccounted for during the final five months of Quitevis’ reign as chair, finances for which Quitevis had direct responsibility,” a press release posted by the NCRCC states.

The NCRCC chairman claims Quitevis was banned from party involvement in Nye County “for actions and conduct unbecoming of a Republican.”

Quitevis said she was forced to hire a lawyer to refute the allegations, which she dismissed as totally untrue. She said her attorney called the sheriff’s department and district attorney’s office last Thursday and was told no criminal case was filed.

“They have been talking about this since April 2012. They said there were missing funds. That’s not true. I never stole anything. I was the one who brought in the money, I left them $10,890,” Quitevis said.

She said before the former NCRCC board turned over the books, they wrote checks to pay the bills, including 10 months of rent to Dr. Jeffrey Gunter at $500 per month and paid the phone bills.

Quitevis said the NCRCC should have had $2,090 left in the account.

“I’ll bring it to my lawyer. I’m planning to sue them. I don’t know where they get that figure, $14,000. How many members do we have?” Quitevis asked.

Carns told the Pahrump Valley Times he spoke with a detective at the sheriff’s office.

Sheriff Tony DeMeo confirmed Tuesday his department received the complaint and a detective is investigating. But he said there was no forensic audit presented by a certified public accountant. DeMeo wouldn’t confirm whether the investigation had merit, but did disparage the audit.

“The forensic audit was B.S.,” DeMeo said. “It was two pieces of paper that basically said nothing.”

“From what I looked at, it could go both ways, civil and criminal, or it could go nowhere,” DeMeo said.

Nye County District Attorney Brian Kunzi said he hasn’t received an investigative report from the sheriff’s office. Nor has criminal complaint been filed.

The NCRCC press release states Quitevis founded the Asian American Republicans of Nevada, was appointed by Gov. Brian Sandoval to the Nevada State Board of Oriental Medicine and works on Asian community relations for the Clark County Republican Party.

Quitevis was appointed to fill the two-year unexpired term of a former county commissioner, Peter Liakopoulos, in 2008, but lost in the 2010 Republican primary to Dan Schinhofen.

She was also appointed to a committee to screen candidates to succeed the late District Court Judge John Davis following his death in January 2011.