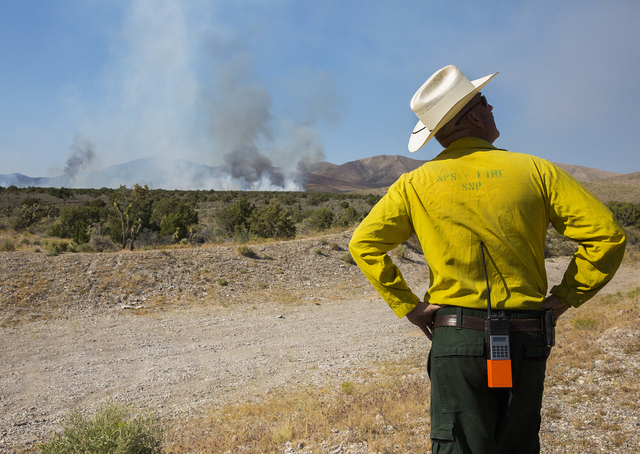 Ray Johnson, a fire prevention officer with the U.S. Forest Service, waits for a VLAT aircraft to drop retardant on a a wildfire near State Route 160 and Lovell Canyon Road. The fire shut down the road between Pahrump and Las Vegas for a few hours on Sunday. Benjamin Hager/Special to the Pahrump Valley Times

The Lovell Canyon fire that shut down part of State Route 160 on Sunday is nearly fully contained.

The U.S. Forest Service reported late Monday night that the fire had spread to 445 acres and was about 80 percent contained.

The wildfire started around noon on Sunday at the Spring Mountain National Recreation Area, east of Pahrump, and spread quickly with help from high winds and heat.

U.S. Forest Service spokesman Ray Johnson said the fire began at about noon Sunday. Crews from the U.S. Forest Service, Clark County Fire Department and the Bureau of Land Management are fighting the blaze. At least six engines, along with a helicopter and large and small aircraft, also were enlisted to fight the fire, which is located within the Spring Mountain National Recreation Area. Inmate fire crews have also been brought into the area from as far as Pioche to help fight the wildfire.

They come in and they do good work and we appreciate the help, Johnson said.

When I came in (Sunday) I just saw a huge pillar of smoke, said Angela Torres, who works at the Mountain Springs Saloon, about 5 miles from the wildfire. Torres said she saw less smoke from the fire on Monday than the day before.

Johnson said that overnight humidity and lower temperatures helped slow the spread of the fire, allowing hand crews to get close enough to start containing it.

Helicopters and planes are also in use in Lovell Canyon, dropping fire retardant from above while crews work below, and surveying the area for objects and formations that could affect the fires spread.

Investigators believe the fire was caused by people because the only other factor that could have started the fire is lightning, which wasnt in the area when the fire began.