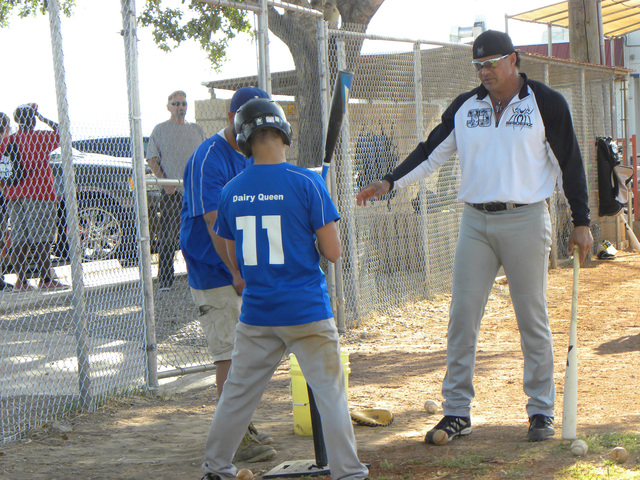 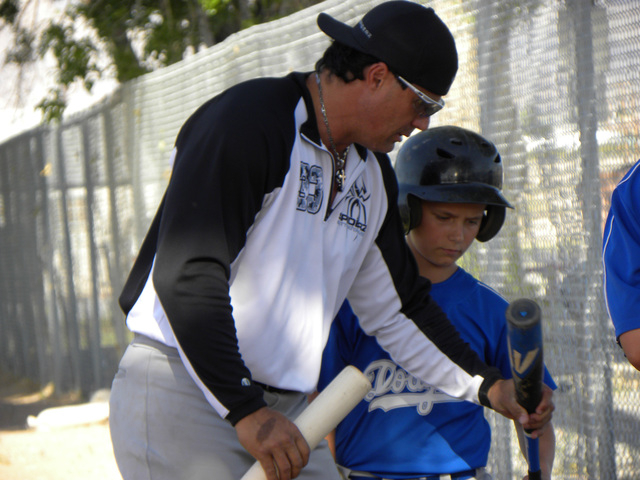 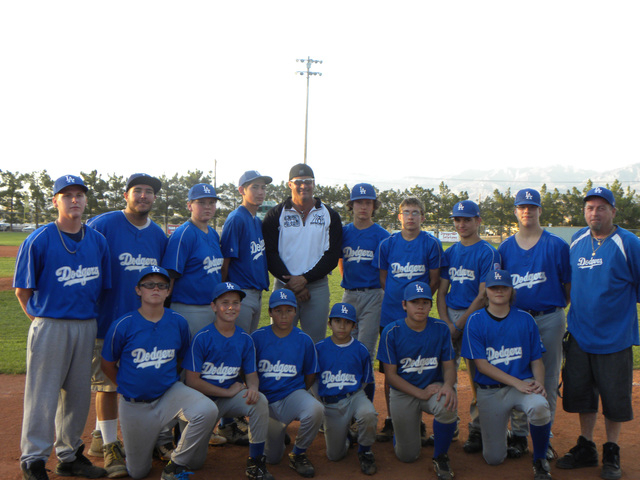 It isn’t every day that a former Major League Baseball player drops in on a Pahrump little league practice.

Thanks to one coach’s generous bid at an American Cancer Society silent auction last month that was exactly what happened. On Friday Jose Canseco attended a junior division little league practice for the Dodgers at Ian Deutch Memorial Park to give the team some pointers.

Canseco played for a number of teams during his career in the major leagues, which spanned from 1985 to 2001, including the Oakland Athletics, Texas Rangers, Toronto Blue Jays, Tampa Bay Devil Rays, Boston Red Sox, New York Yankees and Chicago White Sox. Canseco was named Rookie of the Year in 1986, became the first member of the 40/40 club, was named most valuable player in 1988, became a six-time All Star player and won two World Series championships.

Canseco donated his time as part of an April 30 benefit event in Las Vegas called Cupcakes vs. Cancer, where he was one of six celebrity judges comparing cupcakes prepared by professional and amateur bakers to raise money for the American Cancer Society.

“It was an event to raise awareness for Relay for Life and I had a panel of celebrity judges and Jose was one of my celebrity judges,” Relay for Life Specialist Shannon Moore explained. “He also donated a silent auction item. We had an amazing silent auction with a crazy amount of sports stuff — signed Dodgers stuff, signed shoes worn by Nick Collison, a vintage Padres jersey — and Jose donated a signed bat and batting practice with Jose Canseco.”

Dodgers Coach Josh Arimura said when he saw that the batting practice with Canseco was one of the items up for bid that evening he thought it would be an excellent opportunity to do something special for the hardworking kids on his team.

Arimura explained the Dodgers had a rough start this season, comparing their luck to that of the famed little league team from “The Bad News Bears.”

With a lot of hard work and dedication, however, he said they have been able to improve their record over the course of the season. As of Friday Arimura said the Dodgers were on a four-game winning streak.

“It was money well spent and the kids deserved it, especially after last night’s game, 6-2, we beat the best team in the league. They only have two losses, so I was pretty proud of them,” he said. “They showed a lot of dedication … I felt that they deserved it and it’s also helping me too because I’m getting something out of it as well so I can show them later on down the road.”

“Josh basically bought the silent auction item for his little league team. He said he wanted the kids to know he cares and that he wants them to do well. So he thought that this would be a really awesome gift,” Moore added.

Throughout the practice Canseco worked with the young players on their arm and body positioning as well as their swing, giving them drills to help improve their form.

“Jose’s really good with the kids,” Arimura said. “He analyzes and finds out what’s wrong with their swings… He’s really intune and he’s helping the kids a lot. He’s really vocal and I’m also learning too, so it’s a really great experience and I hope the kids get a lot out of it.”

Time wasn’t the only thing Canseco donated to the team last week either. In the middle of the Dodgers practice, after realizing the kids were working with baseballs that were in less than ideal condition, Canseco went to a local store with Moore to purchase new baseballs for the team.

In the short amount of time the kids were able to spend with Canseco, Arimura said he could already see a difference in the way they were hitting — something he thought would help them going into the league playoffs that start this week.

“I think that’s going to make a big difference, I can already see it,” the coach said. “They’re enjoying it, I can tell, they’ve got smiles on their faces so I’m really glad.”

The American Cancer Society’s annual Relay for Life is scheduled for May 16-17 at Petrack Park. Opening ceremonies will be this Friday at 6 p.m. Cancer survivors are invited to start the festivities with a special survivor lap to honor them and will also be gifted with a free t-shirt and dinner before the start of the event at 4:30 p.m.

For information about the American Cancer Society or to sign up for Relay for Life visit http://www.pahrumprelay.org or call Moore at 702-891-9022.