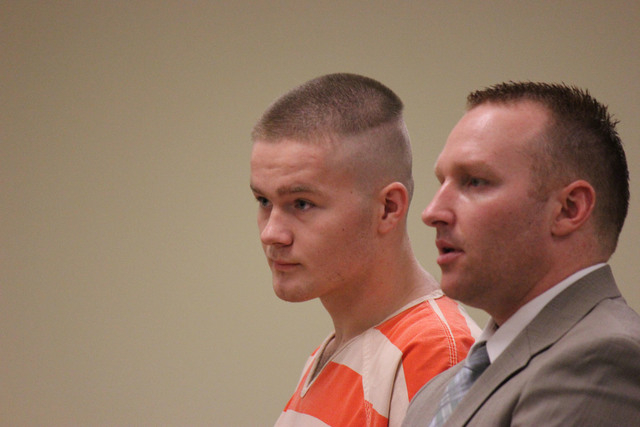 A man has agreed to enter a guilty plea to a single count of felony attempted sexual assault in Pahrump Justice Court on Monday.

Jacob Varner could face a prison term of between two and 20 years in the Nevada Department of Prisons when sentenced later this year.

Nathan Gent, Varner’s attorney, said that according to the plea agreement, the state would stand silent at sentencing and dismiss all other charges.

When questioned as to whether he understood the negotiations, Varner said, “I do understand.”

Gent explained that the state would agree to dismiss any other charges that might arise related to this incident.

Judge Kent Jasperson explained to Varner that if he changed his mind, that he would not be returning to justice court.

Jasperson denied the motion for Varner’s release and said the $50,000 bail amount would remain in effect.

“I would also ask that my client be released from custody so he may go to California and get his affairs in order before he returns here,” Gent said.

Treffinger opposed the motion, expressing concern for the victim’s safety.

Varner was arrested and charged with sexual assault on Nov. 16 after deputies with the Nye County Sheriff’s Office responded to a report of an alleged sexual assault.

When detectives made contact with the victim, she reportedly said that she had been sexually assaulted by a male friend who was later identified as Varner.

The victim claimed that Varner had been making sexual advances on her, which she attempted to refuse. The victim explained she had fallen asleep while visiting with Varner and reportedly woke up around 8 a.m. the next morning and promptly left the residence.

When contacted by police Varner reportedly admitted to having sex with the victim but claimed it was consensual. Varner reportedly agreed to take a computer voice stress analyzer test and it reportedly showed him being deceptive, according to the arrest report.

When questioned about why he was being deceptive, Varner reportedly said, “I was afraid. I didn’t have her full permission.”