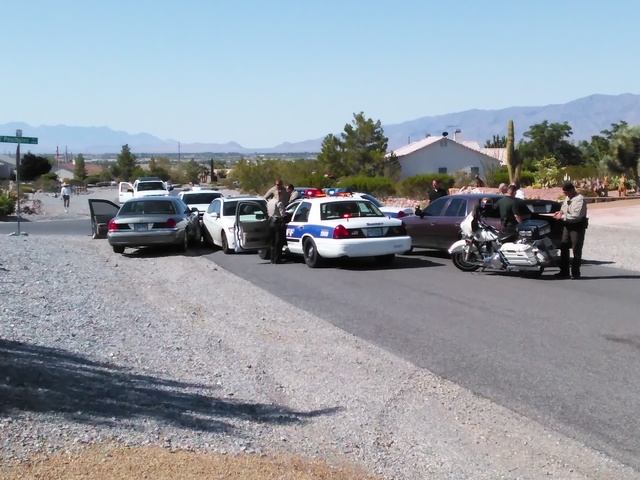 A California man remains behind bars at the Nye County Detention Center after failing to pull over for an NHP trooper while en route from Las Vegas to Pahrump along Highway 160 on Monday.

Troopers attempted to pull over Atapour after he allegedly committed a traffic infraction on the highway.

NHP notified Nye County dispatch that Atapour would not stop after being signaled to pull over.

“It started just after 9 a.m. where NHP was attempting to stop the driver who obviously did not heed the instructions to pull over,” he said. “The car had California license plates.”

According to the arrest report, Atapour refused to stop and repeatedly put his hand out of the window of the car, while signaling and pointing to the right shoulder of the highway.

“Mr. Atapour crossed the fog-line multiple times and would signal as if he were going to pull over, but did not,” the report stated.

Roughly a half-dozen deputies attempted to stop Atapour before arriving in the heart of town.

Spike strips were deployed at the intersection of Manse and Highway 160, as well as Winery Road but Atapour was able to avoid them.

Atapour turned on Winery and proceeded to Rainbow Avenue, where deputies performed what’s known as a Pursuit Intervention Technique (PIT) maneuver and ultimate stopped Atapour’s progress at the corner of Rainbow and Peschutes Street.

“He tried to rabbit on us but we were able to apprehend him,” she said. “There were no injuries but we had one sheriff’s office vehicle that sustained some damages when the driver of the car tried to back up after he was pitted. We know very little about the suspect, only that he is a California resident who was coming in from Las Vegas.”

When asked why he refused to stop for NHP and sheriff’s deputies, Atapour reportedly said, “I didn’t know I had to.”

Atapour was arrested and transported to the Nye County Detention Center, where a urine sample revealed he tested positive for marijuana and opiates.