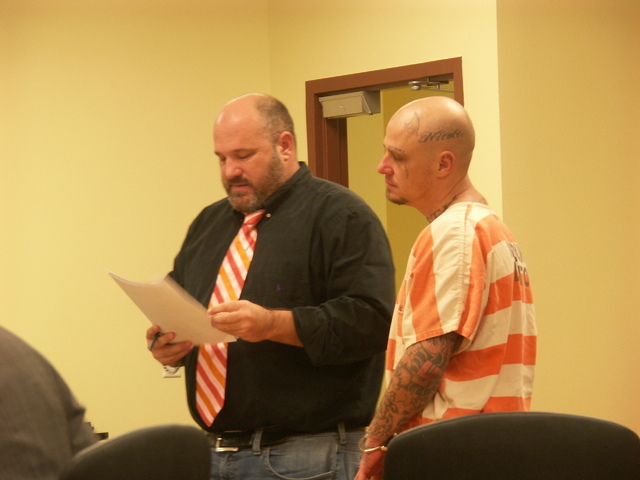 An odd turn of events occurred this week in the case of a man initially arrested Nov. 1 for the armed robbery of Kentucky Fried Chicken.

Though Nye County Sheriff’s Detectives have since dropped the robbery charges against McFadden, Public Defender Jason Earnest said this week that his client remains behind bars at the Nye County Detention Center on drug possession, possession of drug paraphernalia, and possession of methamphetamine charges.

“There were two different cases,” Earnest said. “One was that Mr. McFadden was involved in the rash of robberies we’ve seen in our valley. Somebody fingered him and it became clear that the confidential informant was lying. The judge got news of that and he was released because there was no crime committed and clearly Mr. McFadden was not involved.”

Earnest also said he has concerns about the reliability of information obtained from confidential informants by the sheriff’s office.

“It’s not unique to Pahrump,” the attorney said. “The CI’s are basically addicts who are trying to work themselves out of trouble. They are untrustworthy by nature and they lie to protect themselves. It’s not surprising at all and they will have to face the crucible of cross-examination in a court of law.”

McFadden has had numerous run-ins with local police, going back more than 14 years on charges ranging from domestic battery, burglary and possession of stolen property, to drug possession and conspiracy charges.

A nationwide warrant was issued for the arrest of McFadden for the Oct. 12 robbery of the KFC on State Route 372. He was located Nov. 1 at a residence on McMurray Drive, which detectives contend is known for narcotics activities.

Prosecutor Patrick Ferguson did not elaborate on the specifics of the case, but he did say the district attorney’s office is reviewing the present charges to determine whether to proceed with prosecuting McFadden.

“Regardless of what his history is, these criminal cases will stand or fall on their own merits,” Ferguson said. “If we have sufficient evidence, we will charge him. If we don’t, we won’t, regardless of what a bad guy he may have been.”

Earnest, meanwhile, talked about the charges McFadden is now facing.

“This current case is alleged to be based upon investigations that started in August where the narcotics division at the sheriff’s office used a confidential informant in an allegation that Mr. McFadden and his girlfriend were selling methamphetamines to some people,” Earnest said.

The action did not seem to bother Ferguson.

“Under the circumstances, I’m okay with that,” he said. “I don’t reasonably expect he’s going to make $50,000 bail. He’s exactly where we want him to be.”

McFadden will return to court for his formal arraignment on Nov. 17. Meanwhile, authorities are still seeking leads in the KFC robbery.

Beyond confirming that McFadden was in custody, the Nye County Sheriff’s department has not discussed specifics of the McFadden investigation, or the investigations into the armed robbery of the KFC and a pair of Horizon Markets in September and October.