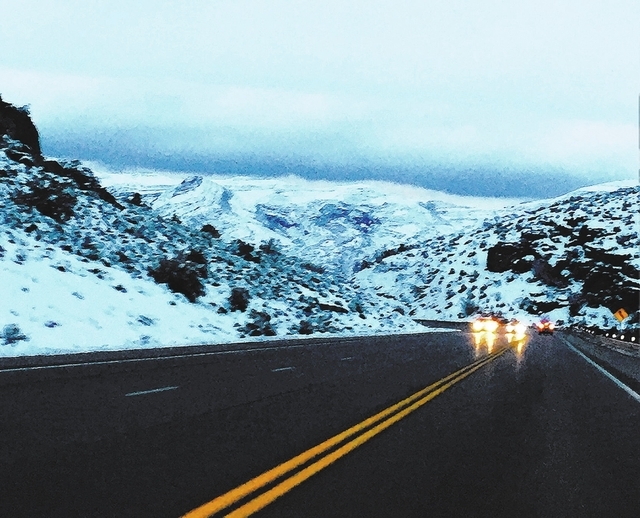 An alert issued Monday afternoon warning drivers that snow chains would be required to pass over the Spring Mountains was pulled 82 minutes later without notification.

Around 4 p.m., the Nevada Department of Transportation issued the alert for state Route 160 mountain pass between Pahrump and Las Vegas until 5:55 a.m.

The alert was sent out through email, NDOT’s Twitter account, and posted on the Amber Alert System leaving Pahrump.

However, NDOT lifted the ban at 5:22 p.m., but did not send out any notification.

When the pass is closed, travelers between Pahrump and Las Vegas must take the northern route up Route 160 to U.S. Highway 95, then travel south. It is approximately 99 miles, or 37 miles longer, to downtown Las Vegas rather than going over the Spring Mountains.

“Obviously we can’t verify all the road conditions,” Illia said. “We need to rely on others to a certain degree. At the time, we got the notice and tried to share it with motorists as we try to share all road updates. That was the information we were provided with at the time.”

Stuenkel said the Highway Patrol was just releasing information that was provided by NDOT.

“I don’t know why they’re saying it’s from us because our dispatch put that information out because we received an alert from DOT because that was the case,” Stuenkel said.

There were restrictions placed on other mountain roads in Clark County leading to Mount Charleston and Lee Canyon.

The road restriction information reached the Las Vegas Review-Journal, who at 5:30 p.m., eight minutes after the restriction was pulled, posted an article stating snow chains would be needed for people traveling over the mountain once they pass state Route 159, Red Rock Canyon Road, heading to Nye County.