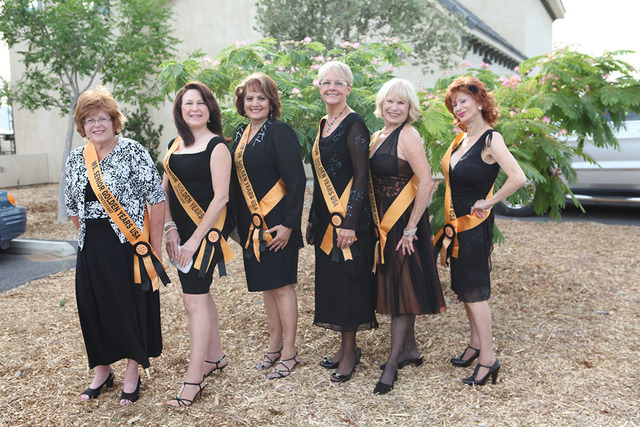 Sanders Family Winery was the venue for the Ms. Senior Golden Years Pageant Meet-and-Greet on Friday.

Hetrick-Irwin also said this year’s group of contestants are dubbed “The Vivacious Six.”

“I have another wonderful group of girls again this year,” she said. “The pageant will be July 9 at the Saddle West Hotel Casino. I always have it at Saddle West because they have been so very gracious over the years.”

Breuer, a self-described ‘snowbird,’ moved to the community with her husband, who passed away last year.

She joined the pageant to meet different people in Pahrump.

“My husband and I got into keeping healthy about 10 years ago,” she said. “At the age of 67, I am not on any medications. I want to talk to people in Pahrump about getting healthy and staying healthy and perhaps checking something off of their bucket list. My talent will involve me playing Patsy Cline’s The Wayward Wind on guitar and singing the song.”

Teri Nichols and her family moved to Pahrump last fall from Southern California near Disneyland and Knott’s Berry Farm.

She too, said she entered the pageant to meet people and socialize.

Nichols said she ran cross an article in the Pahrump Valley Times advertising a tea and fashion show hosted by the pageant.

“I thought that would be a nice way to meet some of the ladies,” she said. “Myself and my daughter went together and were enjoying the day with all of the ladies and the next thing I know I was signing a paper to be in the pageant, and now here I am. My platform is to start an organization called ‘ROIL’ which stands for Reaching Out In Love. I’m really looking forward to doing that. For my talent, I will be singing a Reba McEntire song. I am really enjoying the town and I wanted to get to know some people.”

Virginia Emond moved to retire in Pahrump from Tucson, Arizona in 2000.

Following her husband’s passing two years ago this month, Emond said she fell into a pattern of depression.

“My friends had suggested this would help me get out of it, which it did,” she said. “I have since met all of these beautiful ladies. I’m an educator and I work for the Nye County School District. My platform is two-fold. Because I have experienced students who were homeless, and the effect that it has on their education, I am working to help break the cycle of homelessness. My talent will involve doing a lip-sync and dance to the song “Anything Goes.”

Michelle Caird’s main reason for entering the pageant was to perform community service in Pahrump and nothing more.

“I wasn’t interested in being in a beauty pageant, but I entered because it involves a community service,” she said. “My platform is to coordinate transportation for homebound vets to be able to participate in community activities and events, because many of our veterans are unable to drive but they would like to attend any events that may be happening at our park.”

Caird also said she would like to gauge whether community members would be interested in helping her with the platform she chose.

“By trying to get the community to provide maybe one ride a month for a veteran who is unable to drive or doesn’t have transportation, the veterans will be able to be more involved members of our community.”

When Allene Gunderson moved to Pahrump permanently, she said she knew immediately that she wanted to join the pageant.

“I joined back in January, when B.J. introduced me to her pageant and the rest is history,” she said. “We move to Pahrump late last year from Las Vegas. I am retired from the health care profession and my platform will always be care for the patients and whatever volunteer capacity that I can do at our facility. For my talent, I’ll be dancing to “Roxie” from the musical Chicago.”

Josceleyne A. Dalton, originally from London, England, joked that her accent is from a small town in Texas.

Dalton said she entered the pageant to meet and mix with others in the community.

Her platform involves how the art of relaxation benefits one’s health and relieves stress.

“I wanted to help others help themselves with what I can provide, which is deep conscious relaxation,” she said. “It is much different from the normal way of relaxation activities which involves watching TV or something. I want to help others to relieve stress. I’ve lived here for about nine months. My talent will be singing the song Somewhere Over the Rainbow.”

Members of the Nevada Silver Tappers provided entertainment for the meet-and-greet event.

The Ms. Senior Golden Years Pageant is scheduled for July 9 at the Saddle West Hotel Casino.