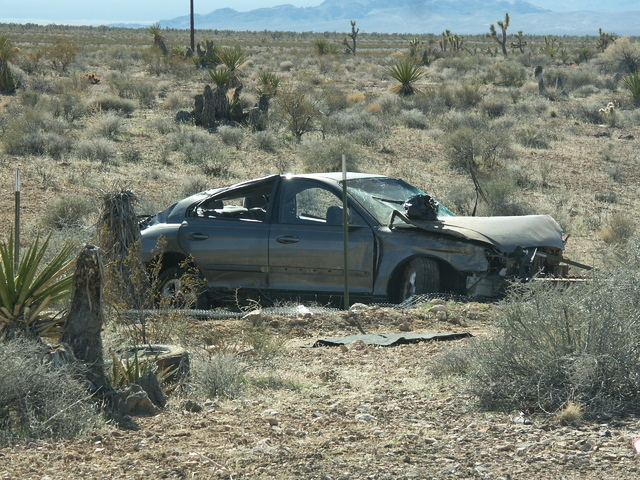 Alcohol may be the cause of a late morning single-vehicle rollover accident along Highway 160 on Wednesday.

Nevada Highway Patrol Trooper Sgt. Carlos Rivera said a woman driving southbound on the highway was speeding when she lost control of the late model sedan just after 11:30 a.m.

He noted there were several independent witnesses who said the vehicle passed them at a high rate of speed when it rolled into the desert near mile marker 29 just outside of the Nye County line.

“The vehicle went off the road and overturned,” he said. “It was a very violent crash and we do have some witnesses who said they did smell some unknown alcoholic beverage on her person.”

Crews from Pahrump Valley Fire and Rescue Services responded on scene where it was determined the woman’s injuries merited she be flown to University Medical Center in Las Vegas.

Nevada Department of Transportation Highway Maintenance Supervisor Nanette Graham said she and her crew were on their lunch break at the time of the accident.

Graham had just taken a bite of her lunch when she spotted the car tumbling into the desert, kicking up large plumes of dust, rocks and debris.

Graham and crew have been working controlled burns of dead brush along the highway this week.

They were first on scene to help render aid to the woman.

“Oh my gosh, it was crazy,” she said. “She was unconscious when we got there and she was going in and out of consciousness. She was seatbelted in, but the car was somehow on top of her and there were some good Samaritans who helped move the car off of her.”

Rivera, meanwhile, provided another warning for motorists who drink alcohol and get behind the wheel.

“We need to remind people that number one, watch the speed limit,” he said. “We have NDOT crews working out here in the center median and they’re putting their lives on the line. If you’re going to drink, don’t drive and if you’re going to drive, don’t drink. They are very simple rules to follow.”

Southbound traffic was at a standstill for more than 30 minutes until the highway was reopened.

The condition of the driver was unknown by press time.