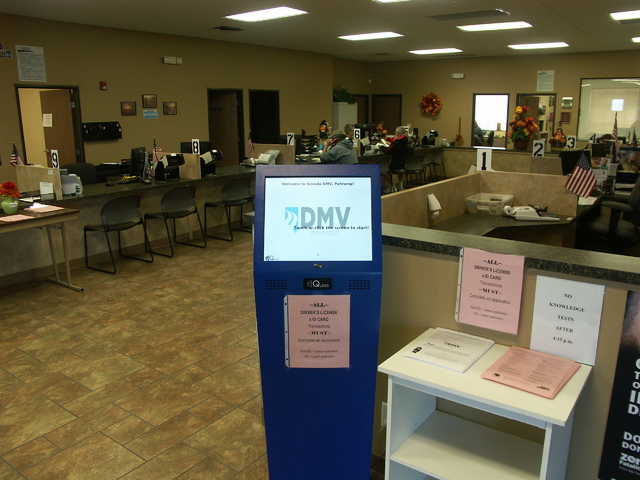 Before August of this year, going to the Nevada Department of Motor Vehicles office on East Basin Avenue was something locals would have preferred to avoid, chiefly due to the wait time.

However, the agency rolled out a new way to conduct business, much to the delight of its customers.

The Nevada Department of Motor Vehicles launched its new “Dash Pass” check-in system which is designed to improve the DMV experience, according to agency officials.

Customers can now text, phone, or go online to place themselves in line at the DMV without being physically present, according to department Public Information Officer Kevin Malone.

“We started this in March up in the Reno offices as a pilot project,” he said. “Dash Pass sends text updates or calls back with an estimated wait time. It then sends reminders and even tells the customers which window will serve them. We then rolled out to the rest of the state just a few months ago.”

The process according to Malone, is user friendly, as there is no app to download.

“The customer will then receive a confirmation text with an estimated wait time as well as Dash Pass options,” Malone said. “We will send you status updates and let you know when you are approximately 15-to-20 minutes from the front of the line.”

Malone said those who are not tech-savvy need not worry. The system affords the same service for those with a regular hardline telephone.

“You can still get in line by calling the same phone number and follow the options from the phone menu,” he said. “You will receive phone calls that will update you and let you know when you are approximately 15-to-20 minutes from the front of the line. It’s a very simple process.”

Using a computer is yet another way to access the service at www.dmvnv.com. An Adobe Flash player is required and the links, officials said, do not appear on all devices.

“It changes the whole dynamic of waiting in line at the DMV,” said department Director Troy Dillard. “Our customers can now check in from anywhere and use their time as they see fit.”

Once at the office, television monitors and a public address system announce the last four digits of the customer’s phone number and the window where they will be served, while DMV staff members check in customers who didn’t join in advance.

Malone, meanwhile, said the new service was created to make a DMV visit a more pleasant and convenient experience for customers.

“It doesn’t necessarily make the DMV offices more efficient because we still have the same number of customers and the same process, but it’s a great convenience for the customer,” he said. “They don’t have to just sit there and wait any longer. It’s mainly a convenience for the customers, more than improving the efficiency in the office and we are glad to be able to do it.”

One local woman on Thursday, who chose to remain anonymous, said she loves the new method of conducting business at the Pahrump DMV office.

The woman, without waiting in line, simply typed her cell phone number into the system and promptly exited the office to run some errands.

Total time, less than 30 seconds to complete the process.

“I have to get a Nevada driver’s license. It’s a renewal and change of address,” she said. “I’ve been here three times and I hated it every time because we had to wait around. I like the fact that I can put in my number and leave and be able to come back without losing my place in line. It’s very convenient for me because it saves time.”

Dash Pass aside, there are additional services customers can take advantage of as of late.

Malone spoke of the agency’s “DMV In A Box.” where customers can perform numerous transactions at a kiosk inside the office, including processing a registration renewal, printing out a driver history record, or order a duplicate driver’s license.

“The DMV touch-screen kiosks can also process an instruction permit or ID card,” he said. “Customers often use it to reinstate a suspended vehicle registration and process exemptions for registration renewals. It’s just a great service and it offers services and audio assistance in both English and Spanish. The kiosks are located at all Nevada DMV offices and in 26 supermarkets and other private locations. Customers can visit www.dmvnv.com/kiosk for details.”

Last year DMV customers completed 560,500 transactions at kiosks during 2013. These are customers who otherwise would have waited in line to be served by a technician.

The total number of transactions completed by the DMV website, kiosk and other alternate technology topped one million in that same period, according to the agency’s website.