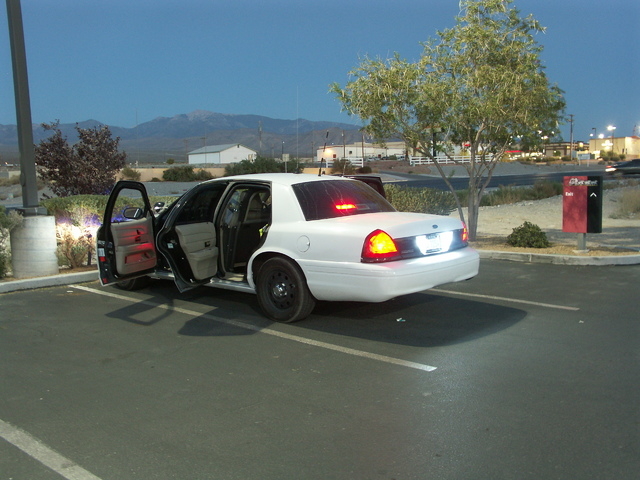 The report of a robbery last Friday led to the citation of a man who police initially thought was impersonating a law enforcement officer.

Lt. Mark Medina said the vehicle, purchased from a California Highway Patrol auction, was similar in appearance to an unmarked Nye County detective’s vehicle, right down the accessories.

“After buying the car from the auction house, he outfitted it with a number of items that were obvious police equipment,” Medina said. “He had a front push-bumper and the red and blue LED emergency lights throughout the front bumper and windshield. It also had two spot lights and a prisoner cage.”

Medina said deputies initiated the traffic stop on the vehicle after a local woman the previous day called police to report a man who was driving a white Ford Crown Victoria stopped her by activating the red and blue lights on the vehicle.

When the man approached the woman, he allegedly grabbed the woman’s purse and fled the scene, the woman told deputies.

“It appeared to her to be a white unmarked police car and she stated that she was robbed after being pulled over,” he said. “Twenty-four hours later the deputies encountered a white Crown Vic that appeared to be a police car.”

As deputies investigated the suspicious vehicle, the alleged robbery victim was contacted and shown cell phone photos of the car and driver.

The woman, according to Medina, could not identify the driver as the man who stole her purse.

“The victim informed us that he was not the person who robbed her and she wasn’t certain if it was the same car,” he said.

After determining the driver of the car was not the robbery suspect, Medina said his main focus turned to why the car was equipped with police lights, siren, and other law enforcement features throughout.

He also said the driver was not the actual owner of the car.

“The driver explained that he borrowed the car,” Medina said. “He called the owner who arrived a short time later.”

Medina then questioned the owner about why the vehicle was outfitted with law enforcement equipment.

“He said he owned a private security company and occasionally his company will do security work for the Department of Defense,” Medina said. “He told me that he’s never needed to use the lights and siren but in case he does, they’re on the car. I also asked why he needed the equipment, but he wasn’t able to give an answer.”

Medina said deputies eventually determined that the owner had no legitimate reason to have a vehicle outfitted with law enforcement accessories and was subsequently cited.

He said retired police cars purchased from auction cannot be re-fitted with red and blue emergency strobe lights, or any insignia that suggests the car is an official law enforcement vehicle after they are auctioned off.

“Our only interest and concern was why he had red and blue lights on the car,” Medina said. “None of the explanations he gave justified having those lights on the car. He is removing them in advance of his court date from the citation. We’re not looking at his status with the (Department of Defense).”

Meanwhile, Medina said deputies are still following up their investigation on the woman who reported her purse stolen.

“We’ve had no other reports to my knowledge that other such occurrences have happened,” he said. “We took a crime report from the victim and it’s being investigated. We take the victim’s word at face value and it appears to be no connection with the owner of that Crown Vic and the robbery victim.”

Police say the woman could not provide a description on the suspect.

Medina also urged anyone with information on the robbery to call the Nye County Sheriff’s Office at 751-7000.