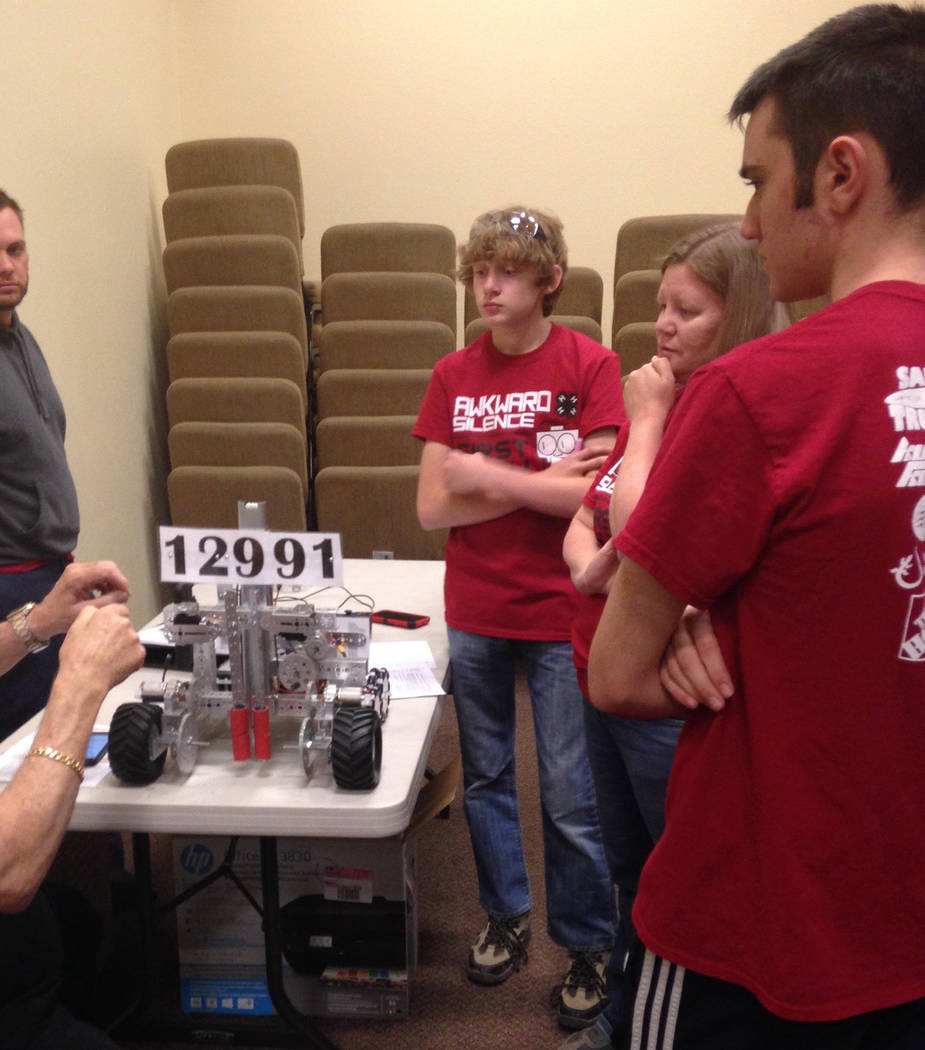 Special to the Pahrump Valley Times The Awkward Silence FIRST Tech Challenge team as shown in a recent photo. The team is holding a gala on Jan. 9 to help raise funds to travel to a state-level competition in Reno at the Pahrump 4-H building at 1651 E. Calvada Blvd, starting at 5 p.m.

The Pahrump 4-H FIRST Tech Challenge team, Awkward Silence, is hosting a public event on Tuesday to show off its high-tech skills and raise funds for future programs and traveling expenses to a state competition in Reno.

Community leaders, teachers, families and students from the Pahrump Valley are invited to attend a Jan. 9 event to check out Awkward Silence’s award-winning robotic project and enjoy the festivities. The event is set to begin at 5 p.m. in the 4-H Annex building at 1651 E. Calvada Blvd. There is no cost to attend.

Eventgoers will enjoy demonstrations, light refreshments and music by DJ VegasMickey. Attendees will also be able to partake in a live auction containing a variety of prizes: a membership to Front Sight Firearms Training Institute, valued at $10,000, works of art, vacation packages and other items.

The 14 youths, ages 12 to 15, are working to raise funds to travel to Reno for the Feb. 8-9 statewide competition or the FIRST Tech Challenge Nevada State Championship. If successful there, they will move on to the national competition.

Awkward Silence has already worked to take first place in two regional competitions, including one in Boulder City on Dec. 9, 2017.

“The youth in this club have held a car wash, a book sale, a bake sale, and a rummage sale to raise money for the season,” said 4-H Coordinator Stormy Ingersoll. “They formed a fundraising committee to reach out to the community for support.”

Several local businesses also donated to the initiative. For those businesses that gave $200 or more, Ingersoll said the club dedicated the back of the team T-shirt for them.

Members of Awkward Silence had to “buy all of the parts needed to build a robot and will need funds to travel to Reno for the state championship in February,” Ingersoll said.

If the team moves on to the national championships, Ingersoll said 4-H might not have the funds to travel across the country.

The competitions are part of a national endeavor known as the “For Inspiration and Recognition of Science and Technology” program. Under that program, there are four levels of building and robotics design: FIRST LEGO League Jr., FIRST LEGO League, FIRST Tech Challenge and FIRST Robotics Competition.

These programs allow for children ages 6-18 to participate.

Club leaders Ashley Hall and Adam Lightfoot, along with members of Awkward Silence, are pushing to expand into all these levels with the aid of Ingersoll through a coalition with the Pahrump school district, Southern Nye County 4-H and other agencies, according to a news release from 4-H.

For more information, contact Ingersoll at 775-727-5532, ext. 1. You can also head to Pahrump 4-H’s Facebook page for information on the upcoming gala.