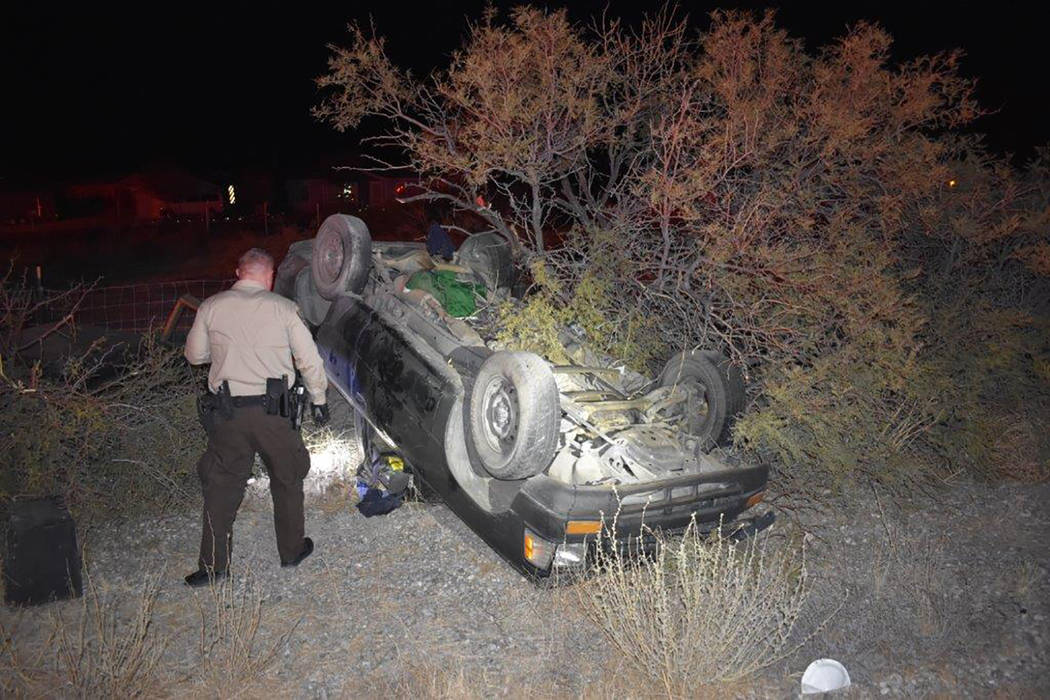 Special to the Pahrump Valley Times An unidentified man was flown to UMC Trauma in Las Vegas, following a two-vehicle collision just before 9:30 p.m. on Friday, in the area of Highway 372 and Bannovitch Street. The exact cause of the collision remains under investigation. 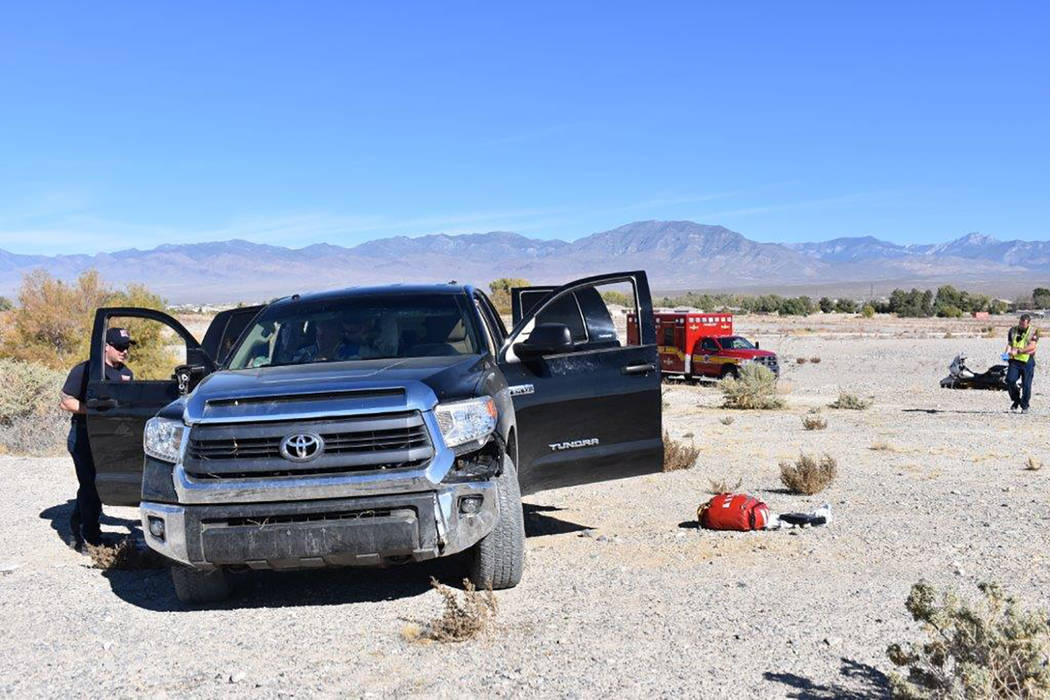 Special to the Pahrump Valley Times Nye County Sheriff’s deputies continue their investigation into the cause of a motor vehicle mishap last Friday morning, along Highway 372 at Red Butte Street. The driver, according to Fire Chief Scott Lewis plowed through several traffic barriers before the vehicle came to a rest several hundred yards in the desert. the unidentified man sustained serious injuries as a result of the crash.

A local bicyclist was flown to UMC Trauma in Las Vegas after being struck by a car on Tuesday, Nov. 7.

Pahrump Valley Fire and Rescue Services Chief Scott Lewis said crews were summoned to the scene on the south end of town just after 5 p.m.

“We were dispatched for a report of an injury motor vehicle accident at Quarterhorse Avenue and Comanche Street,” Lewis said. “Upon arrival, crews found a vehicle versus a bicyclist, who sustained significant injuries which warranted flight. That person was transported from the scene, via Mercy Air 21 and was subsequently flown by Mercy Air 21 to UMC Trauma in Las Vegas.”

Nye County Sheriff’s deputies continue their investigation into the cause of a peculiar motor vehicle collision last Friday, where a man sustained serious injuries.

“Upon arrival, crews found a vehicle that had left the roadway and plowed through several traffic barriers and an embankment,” Lewis said. “That vehicle continued to travel several hundred yards through the desert at a high rate of speed. The vehicle eventually came to rest in an upright position. The initial investigation revealed that one occupant, who appeared to be unrestrained, sustained a significant injury, however, the local helicopters were unavailable at the time, as they were on other flight assignments.”

The unidentified man was eventually transported to Desert View Hospital and subsequently flown to UMC Trauma in Las Vegas.

Later on Friday, emergency crews were dispatched to another motor vehicle collision with injuries in the area of Highway 372 and Bannavitch Street, just before 9:30 p.m.

“While responding, crews were notified that the vehicle was resting on its roof, while a second vehicle was pulling a horse trailer at the time of the accident,” Lewis noted. “Upon arrival, crews found the accident as reported and discovered all occupants were out of their vehicles. The patient was medically evaluated on scene, but declined transport to the hospital. It is my understanding that the situation then turned into a law enforcement issue.”

On Monday emergency crews were dispatched to Country Place Road on the north end of town where a vehicle inexplicably left the roadway just before 2 a.m.

Upon arrival, the driver who self-extricated from the vehicle was medically evaluated but declined transport to Desert View Hospital.