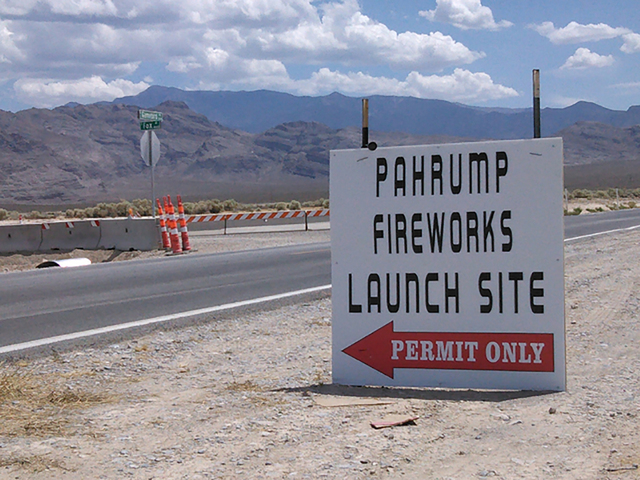 The Pahrump Fireworks Launch Site will be open Friday and Saturday, 6 p.m. to midnight, for New Year’s celebrations. Special to the Pahrump Valley Times

The July Fourth holiday is not the only time to shoot off fireworks in town.

Matt Luis, Town of Pahrump Buildings and Grounds Supervisor, said the town’s fireworks launch site will be open to New Year’s Eve revelers looking to bring in 2017 with a bang or two.

The site is located on Fox Road on the south end of town.

“The fireworks shooter site will be open from December 30th and 31st from 6 p.m. until midnight,” Luis said. “I will have staff out there and folks can come in on Fox Road, which that is newly paved, and we hope a lot of people show up.”

For convenience purposes, Luis also said portable lighting and restroom facilities will be provided at the site. There’s also a strong emphasis on safety.

“We will also have a little area for the safe and sane variety of fireworks which stay on the ground,” Luis said. “Families can come out and know that it’s a safe environment. They won’t have to worry about lighting their own house on fire by shooting off fireworks at home. Inside the fenced area, you have to be 18 years of age with the fireworks that shoot up in the air.”

Local residents who want to legally ring in the New Year with fireworks must purchase a safety permit for $5 from any of the local fireworks retailers in town when shopping for their fireworks.

As a side note to the New Year’s holiday, Nevada Highway Patrol troopers and Nye County Sheriff’s deputies will be on the roadways looking for impaired or distracted drivers.

If opting to travel over the hump to enjoy the New Year’s Eve celebration is on your docket this weekend, be aware of traffic control and restrictions for the area around the Las Vegas Strip.

“Over 300,000 people are expected to celebrate New Year’s in Southern Nevada, with many of them welcoming in 2017 on the Las Vegas Strip,” said NDOT spokesman Tony Illia. “We are making several temporary road and highway closures in order to make the event safer for both motorists and revelers.”

Interstate-15 on-ramps and off-ramps on both south and northbound sides will be closed at 5 p.m. Saturday at Spring Mountain Road, Flamingo Road and Tropicana Avenue. Motorists can still enter and exit I-15 at Sahara Avenue and at Russell Road.

In addition, vehicle access will be restricted at the following locations:

Ramp restrictions will end between 3 a.m. and 6 a.m., Sunday morning, or at the discretion of the Joint Operations Center in the Freeway Arterial System of Transportation.

Visitors are encouraged to use the stairs or the elevators. Before midnight, all stairs and escalators will be barricaded and elevator service will be halted as bridge access will be restricted to pedestrians.

Those looking to ring in the new year on the Strip should also be aware that there is bag ban in effect which bans bulky items, including briefcases, computer and camera bags, coolers, backpacks, fanny packs, strollers and carts.

Purses that are larger than 12 inches by 6 inches by 12 inches are also not allowed on the Strip during New Year’s Eve.