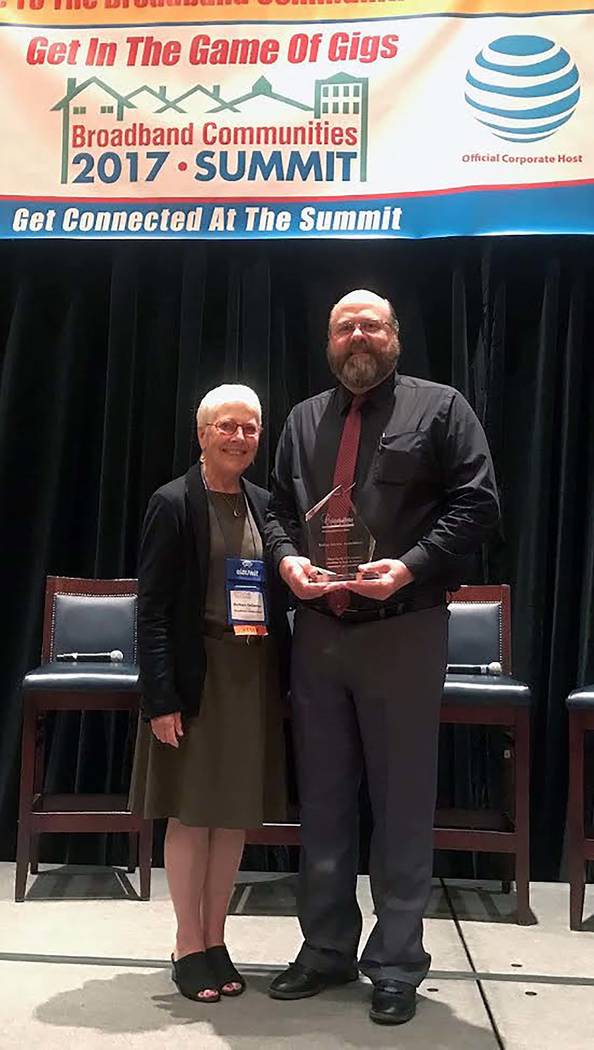 Nate Johnson, interim executive vice president/broadband and information technology communications for Valley Communications Association, accepted the award May at the Dallas meeting, which is the leading conference on broadband technologies for communities.

“Our goal is to bring cutting-edge communications technology to the members in our service territory and, eventually, all of rural Nevada,” Johnson said in a statement. “It is nice to see that our efforts are being recognized with this prestigious award.”

Currently, speeds of 25 megabits per second are available to residential consumers within the Cooperative’s service area. Eventually, fiber-optic broadband will be available with speeds of 100 mbs.

Later this year, one of the communities in that service area – Beatty – will become Nevada’s first all-fiber community, officials said.

Each year, a committee of industry leaders, analysts, and writers selected by Broadband

Communities presents Cornerstone Awards to private developments, municipalities, communities, companies, and individuals with outstanding accomplishments in the area of delivering telecommunications for the benefit of the end user. Since 2004, Cornerstone awards have included recognition for the most notable deployments of fiber-to-the home in the U.S. and abroad.

Cornerstone Awards were originally established in 1989 as the Diamond Tier Awards and presented as recognition of achievement to companies providing cable services to the multiple dwelling unit industry that includes condominiums, apartments and hotels.

The Cornerstone Awards have been expanded to include and recognize achievements in broadband and telecommunications for all communities and municipalities, including residential multifamily (apartments, campus housing, active adult communities) and planned communities (multi-home developments, renewed urban areas).