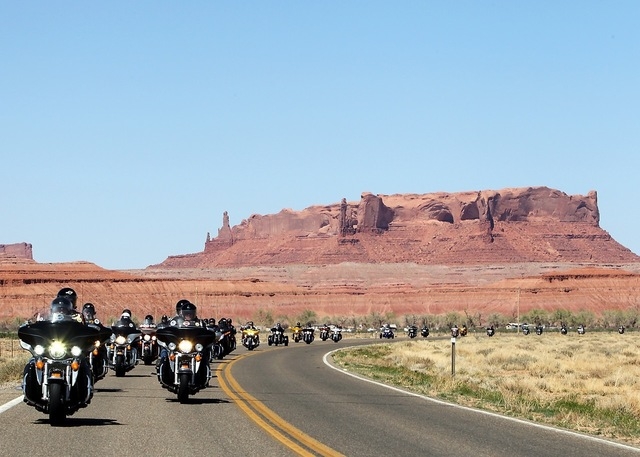 The roar of motorcycle engines will fill the air in Tonopah and much of central Nye this weekend as the 21st annual Kyle Petty Charity Ride Across America will stop overnight this Sunday, May 3.

The event has been dubbed “one of the most successful charity events in the country.”

Petty, a television sports analyst and former NASCAR driver, is expected to lead some 200 motorcyclists on a 2,500-mile trek from Santa Cruz, California beginning Saturday, with an overnight stop in Bakersfield before moving on to Tonopah the following day.

The riders are expected to arrive at the Mizpah Hotel at 5 p.m., and depart Monday morning at 7:30 a.m.

The seven-day event will end on May 8 in Branson, Missouri.

The Nevada Department of Transportation issued a traffic alert Wednesday, stating travelers in certain parts of Nevada can expect traffic delays as the motorcyclists travel through the state.

The riders will come to Nevada from Bakersfield, California via State Route 374/Death Valley Road on Sunday. The group will connect with U.S. Highway 95 through Beatty, up through Goldfield and into Tonopah.

Monday morning the riders will connect to U.S. 6 to state Route 375, then U.S. 93, then state Route 319 on into Utah. They will travel through Hiko, Caliente and Panaca on their way east.

Riders collect pledges which go to Victory Junction, a camp created to enrich the lives of children with chronic or life-threatening illnesses.

It was established in 2004 by Petty in honor of his late son Adam, who died tragically on the racetrack in 2000.

Located in Randleman, North Carolina, Victory Junction “challenges campers to find resilience by looking beyond their illness and also provides a safe place to try new things under unobtrusive, complete 24-hour medical supervision,” according to a Victory Junction news release.

“Each year we select a route that is full of ‘breathtaking scenery’ while also allowing us to spread the word about the charity’s mission,” Petty said. “Year after year, the ride creates lasting memories for our riders. Most importantly, it provides life-changing opportunities for children at Victory Junction.”

As a result of the rides, 7,815 children have attended the camp at no cost to their families.

According to Petty, celebrities who will participate in all or part of the ride include his father, NASCAR hall of famer and seven-time champion Richard Petty; Matt Kenseth, NASCAR driver; Harry Gant and Donnie Allison, NASCAR legends; former NFL great Herschel Walker; and other celebrities from business, broadcasting and sports.

Further information is available at kylepettycharityride.com.