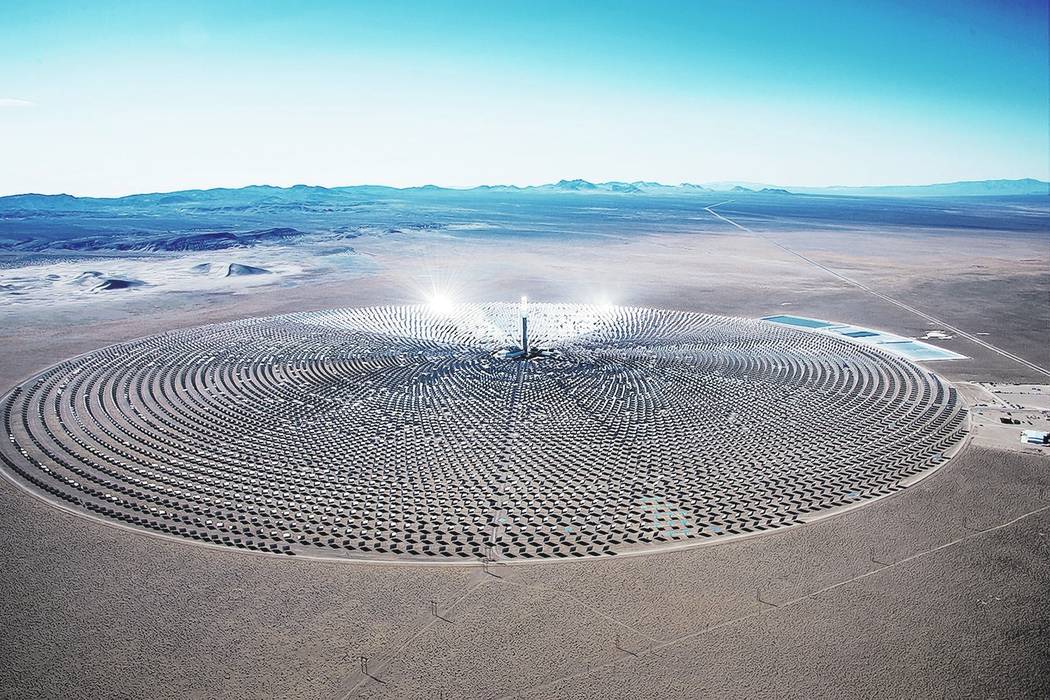 Special to the Pahrump Valley Times Crescent Dunes Solar Project located 15 miles northwest of Tonopah went online in July after more than 8-month outage that was caused by a leak from one of the molten salt tanks in October 2016, less than a year after the plant started generating power.

SolarReserve is moving forward with the plan to build up to 10 more solar thermal towers near Tonopah, but Nye County officials want to make sure the project provides jobs for Nye residents.

At the Nye County commissioners’ meeting on Tuesday, SolarReserve CEO Kevin Smith and SolarReserve Director of development Adam Green talked about their plans to bring a large-scale project to the remote Nevada desert.

Nye County Commissioner Butch Borasky questioned whether SolarReserve will hire enough workers from Nye County for Sandstone, as he argued that the number of jobs at the existing Crescent Dunes Solar Energy Project that were given to Nye residents was small.

“It’s wonderful that we will be host to this 10-tower conglomeration and everything else, but we should be getting something out of it first, citizens and our taxpayers,” Borasky said.

SolarReserve had a requirement in the development agreement to hire a certain number of Nevada workers for Crescent Dunes and had to pay a $458,000 penalty to Nye County for not achieving that requirement, according to Nye County records.

SolarReserve spokeswoman Mary Grikas said approximately 60 percent of the total number of subcontractors for Crescent Dunes were from Nevada.

“We did not keep specific Nye County specifics, nor were we required to,” Grikas said in an email Sept. 6.

In addition, SolarReserve officials said almost 90 percent of the total number of subcontractors were from the U.S., with some international contractors utilized as Crescent Dunes was the first molten salt tower project in the nation.

“There certainly was jobs and a substantial amount of commerce that was done in Nye County,” Smith said. “We did peak at 1,100 jobs on site. Probably close to 30 to 40 percent of those were Nevada jobs. It’s a big facility, and so there were workers that came from other parts around the region.”

“I will be putting the arm on you guys on this one, and I hope the board will go along with me, but we will see what happens,” Borasky told Smith. “We are very happy to have people put the arm on us,” Smith said. “I think for Crescent Dunes, the facility was around 50 percent union and 50 percent non-union. It was probably a little bit more non-union than it was union, but there’s no question, there’s some specialty welding and other requirements, so there were union workers coming up from Las Vegas and Reno.”

Officials said Sandstone will have 2 gigawatts of power capacity which puts the project on the same scale of generation as Hoover Dam in terms of capacity and strategic importance to the grid.

“It will provide 7 million megawatt hours per year, so roughly speaking, that’s supply for a million homes,” Green said.

The announcement about the additional 10 towers came after Crescent Dunes Solar Energy Project, 15 miles northwest of Tonopah, started generating electricity in July for the first time in more than eight months, after a salt leak caused a lengthy outage at the facility.

“We did have an outage that was well covered by the press, and while we certainly appreciate the support of Nye County, the negative treatment by the press isn’t so fun, but that comes with the territory,” Smith said.

SolarReserve, based in Santa Monica, California, is in the preliminary stage of the Sandstone project. Officials said it will require coordination between federal and state agencies. The company has yet to go through a lengthy permitting process that could take in excess of a year or two.

“We are looking at starting construction potentially by 2020, or shortly thereafter,” Smith said.