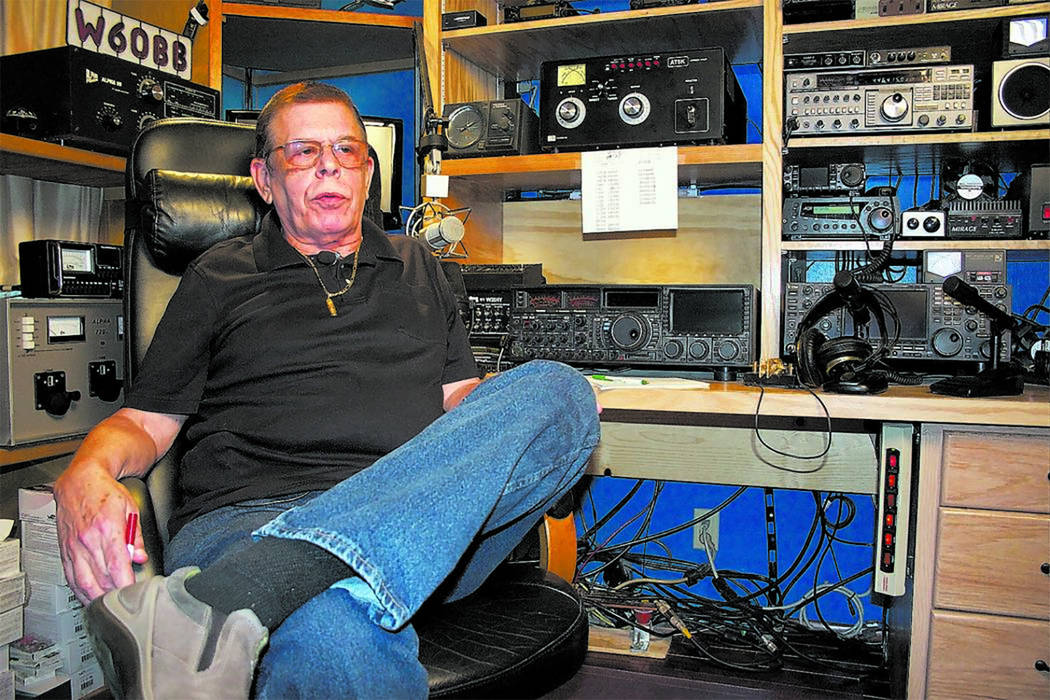 Special to the Pahrump Valley Times Art Bell, 72, was the founder and the original host of the paranormal-themed radio program Coast to Coast AM, which was syndicated on hundreds of radio stations across the U.S. and Canada. He died on Friday April 13. 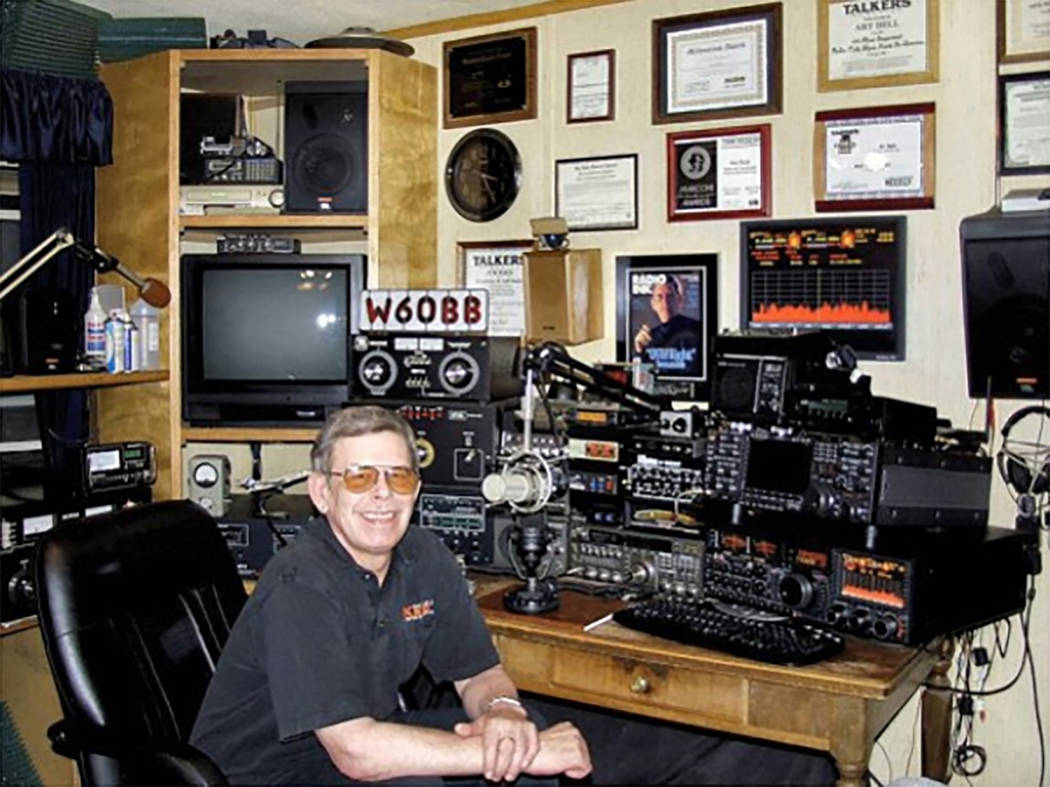 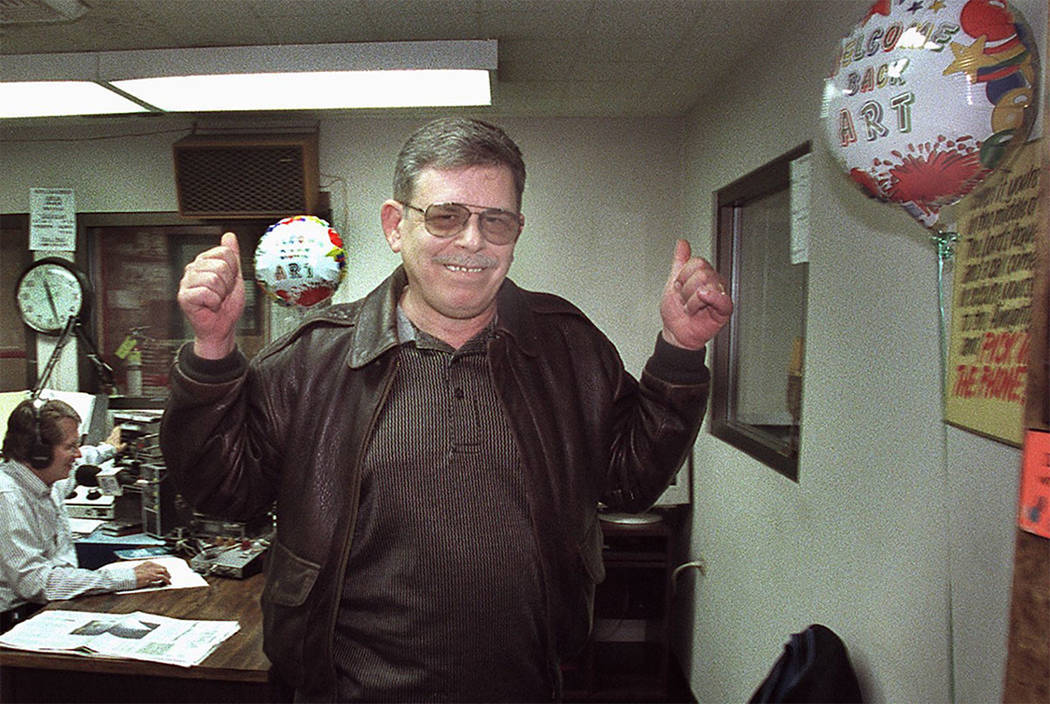 The man, whose late night talk show gave listeners the chills for decades, died on of all days, Friday, April 13, in his Pahrump home.

Bell, 72, was the founder and the original host of the paranormal-themed radio program Coast to Coast AM, which was syndicated on hundreds of radio stations across the U.S. and Canada.

The longtime Pahrump resident was considered by his peers and fans as a legend in radio broadcasting.

“He had COPD and he was very upset with that,” Jackson said. “He told me it was self-induced with cigarettes. He was going to be 73 years old on June 17, this year.”

Jackson said Bell was actually a rock music disc jockey before moving on to talk radio.

He retired and came back to radio on several different occasions over the years.

His original late-night Las Vegas program on KDWN AM 720 many years ago was focused mainly on politics, but he eventually abandoned the format in favor of hot-button issues such as conspiracy theories and gun control.

That decision created a sizable jump in his overnight ratings.

Jackson also said Bell semi-retired from Coast to Coast AM in 2003.

She actually knew Bell for more than a decade before buying KNYE radio.

Jackson said Bell made her an offer that she could not refuse.

“Art wanted me to manage KNYE radio back in January of 2005,” she recalled. “After about two and a half years, he called me on Christmas Eve and told me that I was going to buy the radio station. He told me that he was going to make it very affordable for me. Some people thought that Art still owned the radio station, but he was not associated with KNYE radio after I bought it.”

Things that go Pahrump in the night

Additionally, Jackson said Bell will always be remembered for his strong interest in the paranormal and all things unexplained.

“That was truly something he was very interested in,” she said. “He was always interested in anything unexplainable and he was all over it. Art was a master at talk radio. He was a true international legend and a very innovative pioneer of talk radio.”

At the time, Bell, told the Pahrump Valley Times that the decision to come back to radio was not a very difficult one to make.

Though the show began on September 16, 2013, Bell decided to end the program roughly six weeks later.

His decision to end the program was due to technological issues and a disagreement over the show’s distribution.

Bell had also seen personal tragedy in his life.

Back in 2006, his wife, Ramona Bell, died unexpectedly at the age of 47 in Laughlin, Nevada.

Bell remarried later that year, Airyn Ruiz-Bell, in the Philippines.

Since acquiring the radio station, Jackson said Bell did not have any issues with her management style and ownership.

“He was very happy,” she said. “He told me that I made the station what he and Ramona had originally envisioned it to be, but he never did.”

Business relationships aside, Jackson said she and Bell were much like family.

As evidence of that claim, Jackson spoke about an occurrence when she was forced to admonish her friend.

“When I first took over the radio station, Art had a way of talking down to people,” she said. “We had a slight disagreement right at the beginning, and I said to him not to ever talk to me that way again, and he never did.”

One of Bell’s most famous slogans was “Things That Go Pahrump in the Night.”

Jackson said she will make good on a promise she made to Bell many years ago.

“Art has pounded into my head to take care of his wife,” she said. “This is a really hard time for me. It was like losing a family member, and I am very numb right now.”

For a time, Bell also held the Guinness world record for a solo broadcast marathon, logging more than 115 hours of airtime while working as a DJ in Okinawa, Japan.

The stunt raised funds to rescue over 100 Vietnamese orphans left stranded by the conflict in their country, according to Coast to Coast.

An early love for radio

Bell was born in Jacksonville, North Carolina, on June 17, 1945. The only child in a military family, he moved around a lot as a kid.

He later served in the Air Force as a medic during the Vietnam War, but his love for radio was always there. According to Coast to Coast AM, he was an FCC licensed radio technician at age 13, and while in the Air Force, he created an on-base pirate radio station that played anti-war music.

As far as holding a local memorial service for Bell, Jackson said it is still too early.

“Right now it’s much too soon for us to think about some kind of community memorial observance for Art, and he really wasn’t that kind of a guy,” she said. “Knowing Art the way that I do, the one thing I know he would want me to do is thank all of his fans and listeners. In the not-too-distant future, I plan on going on air live and taking calls from listeners regarding their thoughts about Art. My email and my Facebook is jammed as well as my phone. I just want to give thanks to everybody for all of the condolences. I plan on getting back to those who left messages and words of sympathy, but I’m just not up to it right now.”

Bell’s exact cause of death has not yet been determined.

He leaves behind his wife, Airyn, and his children Asia, Alex and Art Bell IV.

He was preceded in death by his parents.

The Las Vegas Review-Journal contributed to this story.