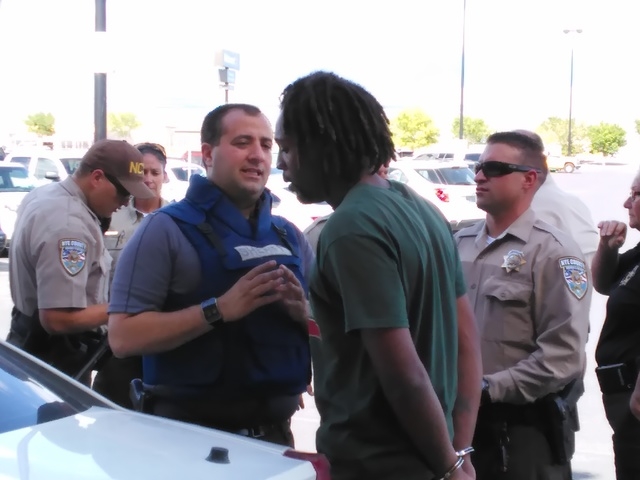 A large assemblage of Nye County Sheriff’s deputies and detectives at Walmart apprehended a man wanted out of California on May 26.

Many shoppers and passersby at the store appeared to be on edge as authorities searched for an unidentified man, along with Aaron Williams, 23, who was reportedly armed and threatened to shoot someone.

A sheriff’s office press release stated sheriff’s deputies located and detained both individuals inside the store and conducted an investigation.

No weapon was located on the men or inside the store.

“One of the two men, identified as Aaron Williams, 23, was wanted on an outstanding arrest warrant for violating the terms of his probation and taken into custody,” the release stated. “He was booked at the Nye County Detention Center to be extradited to California.”

The second man involved in the initial disturbance was released, however the investigation is ongoing.

The release stated the man’s name will not be released pending the outcome of the investigation.

Anyone with additional information regarding the incident is urged to call Detective Wesley Fancher at 751-7004 or anonymously online at ncso_detectives@co.nye.nv.us.