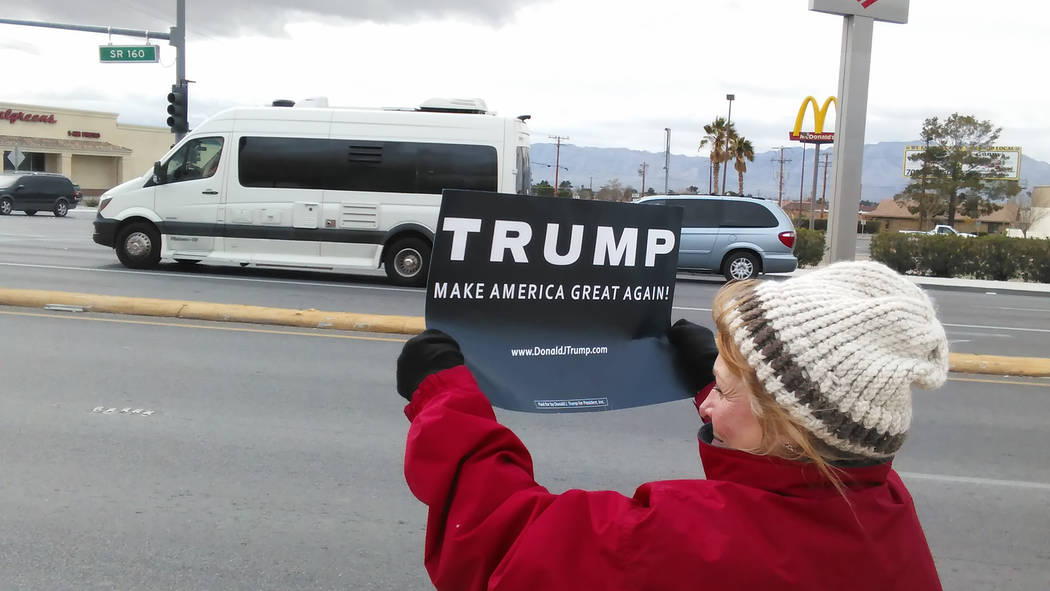 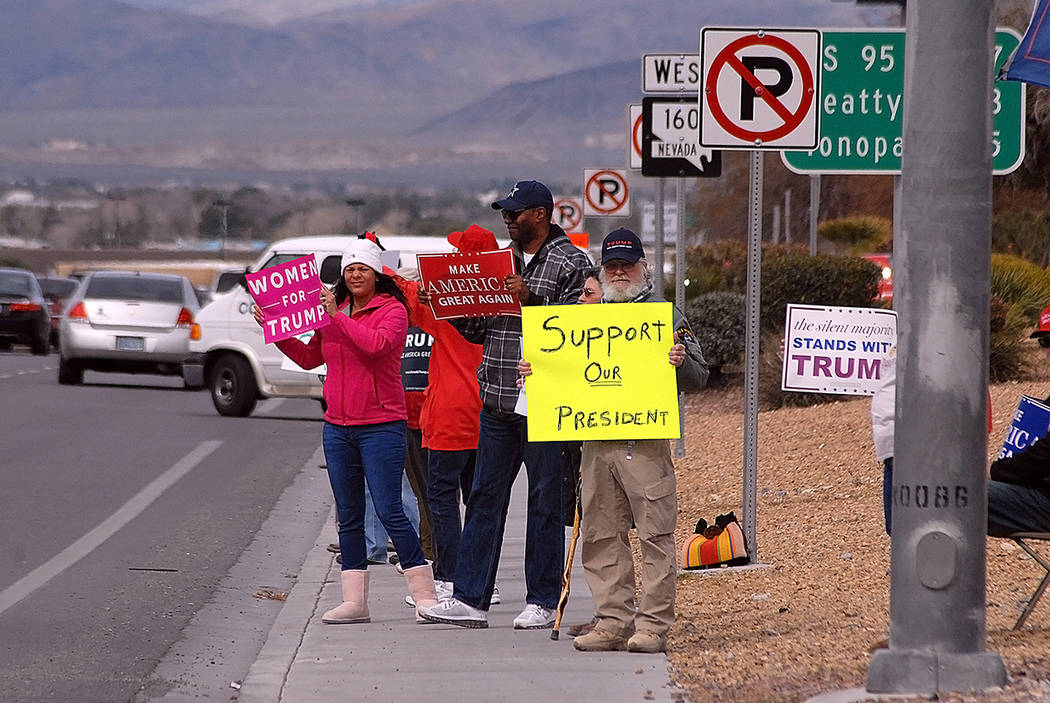 Donald Trump supporters get together to show support for the president on Highway 160 on Monday. Horace Langford Jr. / Pahrump Valley Times

A show of presidential support was on full display as supporters of Donald Trump held a rally at the intersection of Highways 160 and 372 late Monday morning.

More than a dozen area residents gathered with signs in hand, waving to passing motorists just after 11:30 a.m.

Many motorists honked horns in support of the supporters as they whizzed by the intersection.

Pahrump resident Dwight Lilly said he simply wanted to show his public support for the president.

Lilly commented on some of the national media outlets who are calling the new administration’s transition as “in chaos.”

“It seems that way but I think it’s just so slow getting started,” he said. “There have been some problems getting his cabinet picks together the way he wants it and there’s been some controversy with Russia.”

According to a January 2017 declassified report, the United States intelligence community concluded that the Russian government interfered in the 2016 elections.

Lilly said he believes most elections internationally, including the U.S., have been interfered with over the years.

Regarding the 2016 election, he’s waiting for irrefutable proof.

“I have to go with the facts,” he said. “When somebody says this is what happened and produces videos or documents to prove it happened, I would be extremely upset because I don’t want any country interfering with the Democrats, Republicans or Independents at election time. I haven’t seen the evidence that Donald Trump actually did anything with the Russians.”

Lilly also said he supports Trump because he was the declared victor in the 2016 presidential race.

He noted that if anyone from the U.S. was involved with the Russian interference, that person should be prosecuted.

“I will tell you that if it comes out that investigators can point to an individual from our side, then that person should be prosecuted,” he said. “I think if Trump was involved, then he should be prosecuted too. I think we need to tighten up our election process and I think all the major parties need to tighten up their Internet security because it seems to me that just about any 10-year-old kid can break into these computer systems and wreak havoc.”

Interestingly, as a strong Trump supporter, Lilly had cordial words for the previous American president.

“I thought President Barack Obama did an admirable job of getting us out of the recession,” he said. “I don’t have the figures in front of me, but when he took office, we were bleeding jobs by the hundreds of thousands each month. It was a very horrendous situation. President Obama inherited all of that and never had the support of Congress. Congress seems to be totally dysfunctional now.”

Additionally, Lilly said he hopes the American people will soon come together as a nation of one.

“As Americans, we need to solve these problems we are facing because it’s ridiculous to be operating the way we are right now,” he said. “I want a country that is strong and I want us to do it right. I want a fair and even debate on all of the issues. I am not for throwing the baby out with the bathwater, but I think we need to sit down and have an honest conversation as Americans because we have to move forward. We have children and grandchildren who are depending upon us to make the right decisions.”