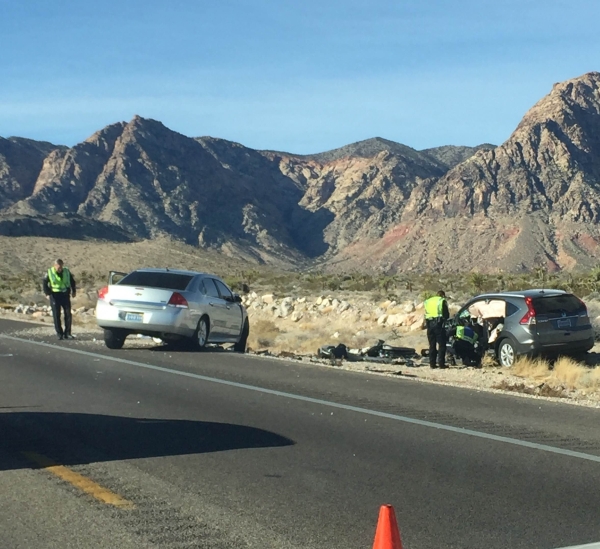 A dangerous stretch of highway connecting Pahrump and Las Vegas is set to be upgraded, making the road safer for commuters.

Work on State Route 160 is tentatively scheduled to begin next week as crews will be filling in rumble strips, placing temporary striping and erecting barrier rails along the highway between the Red Rock Canyon junction and Mile Marker 16.6, according to the Nevada Department of Transportation.

The work will take place between 9 a.m. and 3 p.m., Feb. 16 until Feb. 19 and the construction will require a pilot car operation.

Speed limits will be reduced to 55-mph throughout the 5-mile project stretch while work occurs. Paving work should get underway in early April following biological clearance for desert tortoises, fencing placement and transplantation of native plants.

NDOT will create nighttime lane restrictions along SR-160 in the work zone until 5 a.m., Sunday through Thursday, Feb. 15 until Feb. 24.

Aggregate Industries-SWR Inc. is the general contractor for the project. The $16.5 million project will widen the highway from two lanes to four travel lanes while flattening side slope shoulders for safer vehicle turnouts. In addition, crews will be installing new drainage pipe, placing guardrails and hydro-seeding 38 acres.

The project is scheduled to be completed in early 2017. NDOT urges motorists to use caution while traveling through the work zone, heeding construction signage and taking alternate routes, if possible.

The project comes after a five-year crash study revealed that stretch of highway above average for a state maintained rural road.

There were 280 crashes that occurred on this section of Highway 160 for the five-year study period. Of those, 195 were non-collision (ran off the road) crashes.

Another stretch of Nye County highway will also be widened in the coming year, as a stretch of U.S. Highway 95 near Goldfield has its own project slated for the area.

General contractor Road and Highway Builders began work on the $14.1 million project Jan. 11, which will construct two passing lanes on the highway just north and south of Goldfield. The project also includes widening at the junction of Silver Peak Road to include a turn lane while expanding the Lida Road junction for right and left turn lanes.

Widening road shoulders and flattening of side slopes are also included in the construction plans. The work is set to take place over a 44-mile area from south of Dry Wash to 12 miles south of the Esmeralda/Nye County line. Construction is scheduled to finish by late fall.