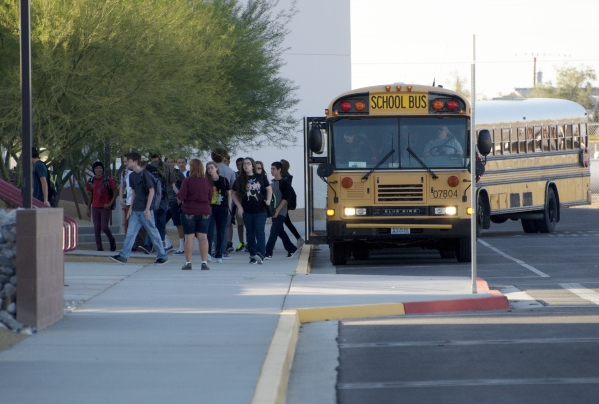 Getting children to school for some families means utilizing the county’s school bus program and with a current shortage of drivers in Pahrump, the district is scrambling to ensure there’s enough qualified drivers to do just that.

The positions are for regular substitute driver spots that are needed to supplement full-time drivers on various shifts.

After advertising the position for several weeks, the school district only received a handful of prospective applicants.

“We have put out notices in the paper that we are hiring substitute bus drivers, for three to four weeks, maybe longer,” Cameron McRae, Nye County School District director of transportation said. “We received just six applications from that job announcement and we just finished our training and two of them already dropped out.”

The four that completed the required class training must now obtain a Nevada Class B commercial driver’s permit to undertake the driving portion of the training. The total time between the class and driving training is 40 hours.

Once drivers pass the driver training, they must then obtain their Nevada Class B commercial driver’s license. The school district will reimburse all applicants for their licence fee as well as a required physical exam needed before hiring. Drivers will then need to sign a two-year contract with the school district

Even if McRae successfully sees the group of current potential drivers through training and into substitute positions, he will still be considerably short of his goal.

“If I get all four hired, my goal is that we need to get another 10 drivers hired,” McRae said. “I have two existing regular routes that I haven’t been able to hire full-time staffing for. They’re being done with substitutes.”

There are currently 43 regular Pahrump bus drivers, with just five regular substitutes and some of those are only available for one day a week, or only in the morning or at night, McRae explained. Because of that he’s having to utilize other employees on his staff to drive some routes.

Although the school district sees bus driver shortages in Amargosa Valley, Beatty and Tonopah, this is a new problem for Pahrump, McRae explained.

McRae said a variety of issues are to blame for the shortage of drivers and that they all combined with an aging existing workforce to enhance the problem.

“Some of it is the time requirement to get certified. It is just more difficult to become a certified bus driver in today’s world,” he said. “Even at $12.50 an hour for substitutes, we’re competing with high-pay work at that skill level in the community. The fact that almost all bus driving work is split-shift, it could be a couple of hours in the morning, then a couple of hours in the afternoon, so that is an issue.”

Dealing with students also plays a factor, as some drivers aren’t prepared to deal with the kind of pressure that student management presents.

“Some of them come in and go, ‘Oh, I have to do that, I have to be CPR-trained. I have to drive the bus and manage up to 60 to 70 kids,” McRae said. “Some of them come and when they go through the first few days of the book work training they see what it’s about and they make a decision that it’s not for them.”

The school district has started to really promote these openings, among others needing to be filled and MccRae is hopeful that effort will help get the number of bus drivers on hand closer to his goal.

“They (Nye County School District) started a campaign trying to publicize the hiring,” he said. “The ads in the newspaper, advertising the openings for the substitute part-time positions is ongoing. As soon as we get these four settled in, we’ll look at how many applications we’ve got and do another class as soon as possible. Again, I’ve got to try and get it resolved so we don’t have to use the higher-costing other personnel that have other job duties.”