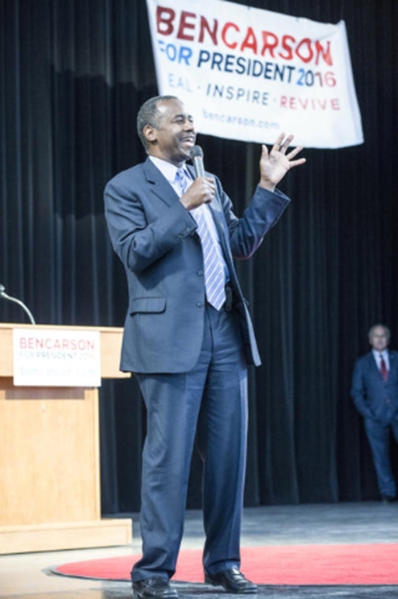 A rally in support of Ben Carson’s campaign on Monday will be followed by the program that will have limited seating, officials said.

Carson will stop at the Pahrump Nugget Hotel and Casino, located at 681 Nevada Highway 160 on Monday, Nov. 23. With the actual event scheduled from 10 to 11 a.m., a rally for Carson will start at 8 a.m., officials said.

A posting on Carson’s website encourages everyone to arrive early due to limited seating. The event is free and open to the public.

“I think we are honored to have someone of the caliber of Ben Carson come to Pahrump and talk to us one-on-one,” Nye County Commissioner Butch Borasky said.

Carson is the second GOP presidential candidate to visit Pahrump in less than a month. Kentucky Sen. Rand Paul campaigned in town on Oct. 28.

“It’s always an honor to have a presidential candidate visit Pahrump,” he said. “With Dr. Carson polling consistently in the top 2 of all GOP candidates, it’s a special honor to have him come speak with us here in Pahrump.”

“With Dr. Carson speaking at this rally, it will be a great opportunity to hear his plans and ideas expressed in more detail than we are able to hear in the limited times allowed in debates,” he said.