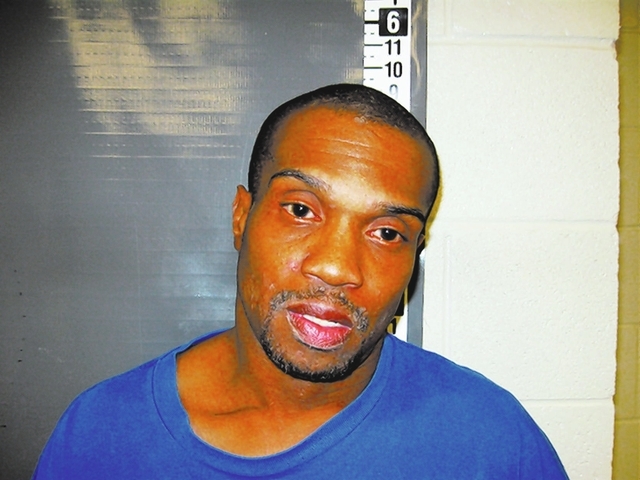 Police have arrested a second suspect in connection to the Sept. 29 armed robbery of a residence on Marne Court.

Eric Lamerre Hemphill, 43, was taken into custody on Oct. 2 on charges of conspiracy to commit robbery, conspiracy to commit kidnapping with a deadly weapon and possession of drug paraphernalia after he allegedly admitted he supplied two additional suspects in the case with materials including a double-barrel shotgun.

Co-defendant Van Morris Farmer, 40, was arrested last week on charges of robbery with a deadly weapon, assault with a deadly weapon, kidnapping and grand larceny after police received an anonymous tip that he was allegedly involved in the incident and the two victims identified him as one of the two men who forced their way into the Marne Court home during a photo lineup.

The third suspect, Joshua Oliveira, 24, who is now believed to be the second male involved in the actual robbery of the victims’ residence, was still at large as of Tuesday.

Nye County Sheriff’s deputies were first called to the 1061 Marne Court address around 11:30 p.m. the night of the incident for a report of a robbery.

The victims told police they heard someone knocking at the rear sliding glass door and when one of them went to answer it, he was met by a male with a shotgun who ordered him and the female victim to “get on the floor.”

The man with the gun, who the victims later allegedly identified as Farmer, and a second male, whom police believe may have been Oliveira wearing a blue bandanna across his face, then entered the home.

According to police, Farmer allegedly kept the gun pointed at the male while Oliveira ordered the female victim to go to the bedroom and get them money and marijuana.

The two men then allegedly left the property with $600 in cash, an Xbox 360, a Madden 25 video game, two cell phones and approximately one ounce of marijuana.

Police then learned the male victim was allegedly supposed to sell the marijuana to Oliveira that evening but they said he never showed up. Later that night the victims said the two males arrived at the home demanding both money and marijuana.

The next day a detective assigned to the case reportedly received an anonymous tip that Farmer may have been one of the two males involved in the armed robbery.

Police then went to Farmer’s Pahrump home to speak with him. When they arrived, they made contact with the man’s wife who allegedly first told deputies her husband wasn’t home, before admitting he was in the bedroom.

When Farmer came to the door he allegedly told a detective he was willing to talk with him. But as the detective began to pressure Farmer saying he knew the man was involved and had “made a bad decision,” Farmer reportedly asked if they could talk about the incident at the police station instead.

Before they left for the sheriff’s office, deputies on scene reportedly noticed a strong odor of marijuana coming from Farmer’s residence. When asked about the smell, Farmer allegedly allowed a deputy to go and get the substance from inside his home.

When asked if the marijuana was the same marijuana stolen during the robbery the night before, Farmer allegedly stated it was not.

Once at the sheriff’s office, Farmer reportedly became uncooperative and said he didn’t know what incident police were referring to. He also allegedly opted not to participate in a voice lineup about ordering the victims to get on the floor.

Farmer was then placed under arrest and transported to the Nye County Detention Center to be booked into custody.

Following his arrest, Farmer reportedly requested to speak with the investigating detective on Oct. 2 stating there was more to the story that police weren’t aware of.

Farmer said after the two men were finished conspiring he left while Hemphill and Oliveira went to commit the robbery at the victims’ address and that Oliveira told him it went badly after they were done.

Based on that information, deputies responded to Hemphill’s residence to question him about Farmer’s allegations.

Hemphill allegedly told police Farmer and Oliveira came over to his house the night of the incident and began conspiring to rob the victims. He additionally stated it was Farmer who was the one in possession of the double-barrel shotgun and that he knowingly gave Oliveira the bandanna and duffel bag to use in the robbery before Farmer and Oliveira allegedly left for the victims’ residence.

The black duffel bag both Farmer and Hemphill described along with the stolen Xbox 360 and two controllers were allegedly recovered from Oliveira’s home during a search following the incident.

As of Tuesday morning both Hemphill and Farmer remained in custody at the Nye County Detention Center. Both were being held in lieu of $117,500 bail and Hemphill reportedly had an additional bail placed on him of $15,000 cash or bond as well.

Police continue to search for Oliveira who they say should be considered armed and dangerous.

Anyone with any information about this case or Oliveira’s whereabouts is urged to contact police by calling 775-751-7000 or emailing detectives at ncso_detectives@co.nye.nv.us.