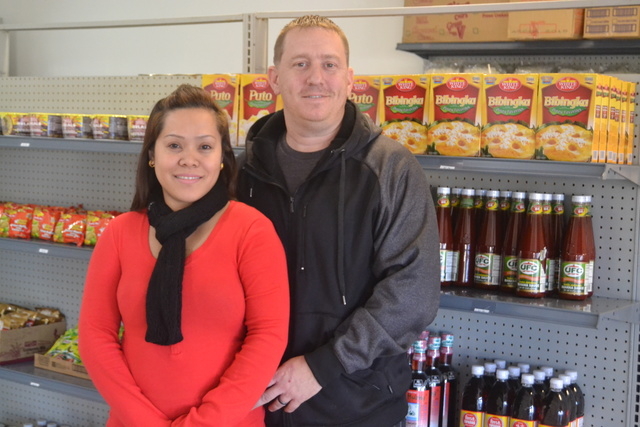 A Las Vegas-based couple has opened a new ethnic foods market in hopes of capturing the market created by Pahrump’s growing Asian and Pacific island population.

According to co-owner Mike Starr, the under-served community previously had to travel to the Las Vegas metro area to obtain culinary specialty items that are now carried by Asian Star Market at the Beverly Plaza off Route 160.

Starr and his wife, Rosemarie, held the grand opening of their new retail market on Dec. 20. Though this is the first specialty food item store for the couple, Starr, a soon-to-be retired member of the U.S. Air Force, has been operating an online store for some time.

Similar to the offerings of the online store, Starr will sell original designed laser-etched military challenge collectibles and graphic T-shirts in the brick and mortar location. The choice to sell the collectibles was a no-brainer, Starr said, given his 20-year military career and the huge number of military veterans who live in Pahrump.

Asian Star Market offers a large selection of specialty sauces, seasonings and food products which include many staples of a typical Asian diet such as flash-frozen Pompano and milk fish, a variety of rice and egg noodles, soups, porridges and preserves. Among the offerings are stewed-in-syrup garbanzo beans, sugar palm and purple yam jam – ingredients for a popular Filipino dish called “Halo Halo.”

Among the most sought after products, Starr said, is boba tea, a slushy flavored tea that includes tapioca balls. The store also offers unusual flavors of ice cream including avocado, coconut and purple yam jam, jack fruit and corn-cheese.

Starr explained that many of the dietary staples of the southern Asian diet are Latin-based, which accounts for the Mais Queso, or corn-cheese, flavored ice cream.

Future plans include Asian barbecue and “street food,” or finger-foods that can be grabbed on the go, Starr said.

The store, he said, will include a “bit” of everything. If they don’t carry an item that a customer wants, Starr said, they will find it. And, he said, they will make certain their prices remain competitive with those in Las Vegas.

There are nearly 520 people claiming pure Asian heritage living in southern Nye County, according to the U.S. Census in 2010. That number does not include Pacific Islanders, or people reporting two or more races to the Census Bureau. However, the popularity of Asian food is growing locally, as shown by the opening of a new, larger China Wok Buffet &Grill at 580 S. Highway 160 late last year.