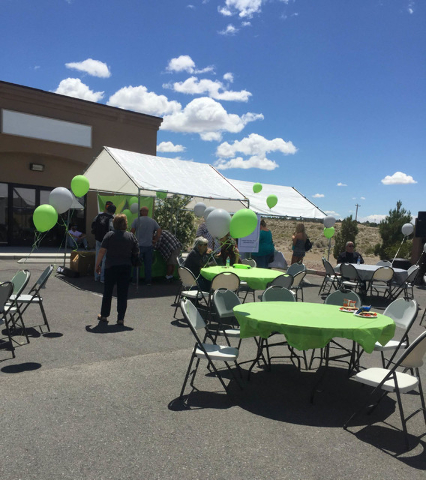 The only medical marijuana dispensary approved in Nye County held its first public event Saturday, looking to make acquaintance with locals interested in their service.

The Grove Wellness Center held a public education event, “A Gathering at the Grove,” hoping to answer any questions related to the medicinal pot business that residents had ahead of their opening.

“It’s a parking lot, informational, educational, party to invite everybody here to understand who The Grove is and understand cannabis and learn different aspects of it,” said Demetri Kouretas, chief executive officer of the Grove. “We definitely need to educate the residents, because those are going to be our customers.”

The Grove first introduced themselves at the Wild West Extravaganza, and Kouretas noticed there were a lot of misconceptions from locals about the medical marijuana industry.

“From there we learned we definitely need to educate the community,” he said. “ A lot of people really have no idea what medical marijuana is, what a dispensary is. How you do you even obtain a card, what the whole process surrounding medical marijuana is. So education is very important.”

There were a few vendors on site to aid in the education of attendees which included Dr. Reefer, the nonprofit marijuana education group W.E.C.A.N. 702, Connor and Connor attorneys at law, and Las Vegas-based medical pot industry publication Elevate Magazine.

Derek Sante, who is a marketer with Dr. Reefer, a company that helps patients obtain medical marijuana cards, explained the events like The Grove’s, is important to the community.

“We are here to help out and inform people about getting their own medical marijuana cards, but also informing them about the medicine and what it can do for you,” Sante said. “We’ve seen the positives with people such as cancer, people who have muscle problems, to glaucoma, and we understand that it works, and we want people to get off of the prescription medicine that is slowly hurting them.”

A Pahrump woman that attended the gathering backed up Sante’s thoughts, claiming that marijuana has helped her through her medical episodes.

“I’ve been breaking the law, in other words, I’ve been smoking weed since I had a double subcutaneous mastectomy when I was in my early 30s,” Veronica Whitton said. “I think that marijuana is the best thing that ever happened to this world, and if God didn’t want us to use it, he would have never put it here.”

Whitton, now in her 70s, said she was first prescribed heavier prescription drugs, which left her lackadaisical, and unable to carry out simple daily tasks.

“They prescribed me to morphine, percadan, percocet, I couldn’t even sign my checks,” she said. “When I was released my doctor said to my two daughters, ‘Your mom can have prescription to just about anything she wants,’ and I said, ‘Don’t worry Dr. Strand, I’ve been smoking pot for a long time,’ and that’s what takes away my pain.”

There is no definite grand opening date planned as of yet for The Grove, as Kouretas has a few things that need to be worked out with getting their grow facilities up and running.

But a tentative time frame of between July and August is what the dispensary is aiming for to start supplying patients who have their medical marijuana cards with medicinal pot.