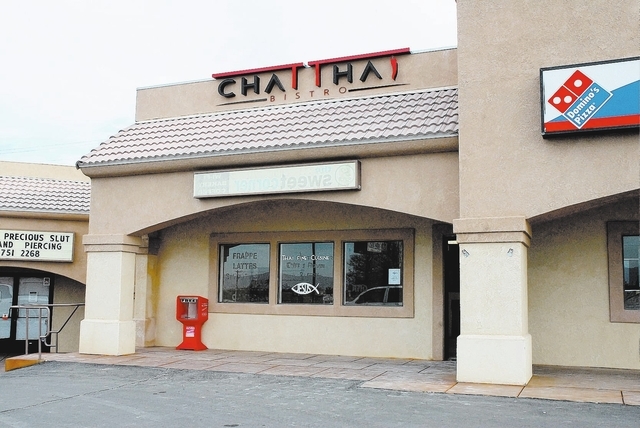 The Pahrump dining scene is about to change yet again. This time there are signs being installed, but none have the doors open, yet.

There is a new Thai restaurant coming to Frontage Road, beside Domino’s Pizza. Chat Thai is scheduled to open in January 2014, but plans have been in the works since July. Shannon and Chat Soisoongnoen will be serving authentic Thai cuisine. Shannon said, “Most Thai restaurants serve the American watered-down version, and we can do that, too, but Chat is from Thailand and will be doing the cooking.

Shannon said Chat learned his recipes from his mother who spent 35 years in the restaurant business and making Thai street food. “His mother was trained by the Thai chefs who cooked for the king of Thailand,” she said. Shannon has food service experience as well from having worked in a steakhouse.

Shannon said the permitting process has been long but most of them are in place. She said $50,000 worth of restaurant equipment is just waiting for funding approval before being ordered. The sign was installed on the building last week.

Another reason to take it slowly is Shannon’s current condition. She is seven-and-a-half months pregnant which has taken precedence over opening the restaurant.

The menu will feature the usual appetizers, curry, stir fry, noodle dishes, soups and salads and will be “call your protein,” as Shannon puts it. “We’ll have chicken, beef, seafood and pork. The sauces are what make the dish what it is and any choice of meat can be used.”

She said although Thai food is spicy in its authentic form, the heat can be adjusted to preference. “Everything will be made to order,” Shannon said. “So, adjusting the spice isn’t a problem.”

The restaurant will be dine-in and carry-out at first, although Shannon said Chat Thai will offer catering for large parties.

A new pizza place on the south end of town has put up a sign on Kellogg Road.

Tower Pizza will compete with K-7 Pizza on Hafen Ranch and Big Dick’s Pizza at the corner of Gamebird Road and Pahrump Valley Boulevard.

Until K-7 opened its current location several years ago, there really was no delivery option for residents on the south end of the valley. Other chains would deliver, but would only go as far as what was then Terrible’s Lakeside, where a driver would meet you in the parking lot across the street.

The Tower Pizza, 3561 E. Kellogg Road, was formerly a Mexican restaurant, but the building has been vacant for several years.

The sign at the new location of El Jefe, 1560 E. Calvada Blvd., went up two weeks ago but there is still no sign of open doors. The location has been under renovation for the past eight months, but has yet to get the doors open.

A spokesperson for the restaurant, currently open at Wheeler Springs Plaza, said owners Alma and Jose Hernandez are waiting for final inspections to be completed and plan to open the doors sometime next month.