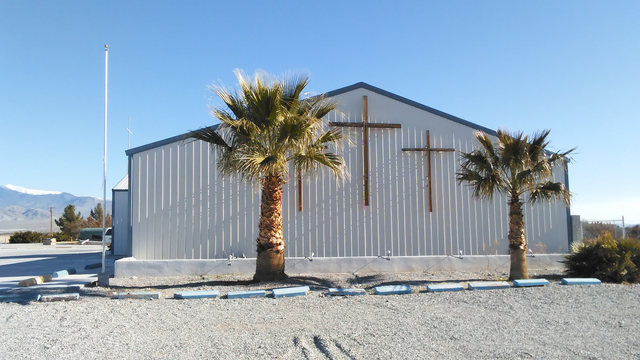 Several American flags stolen from the flagpole in recent weeks at Heritage Bible Church has the congregation concerned. Church leaders are in the process of purchasing and installing security cameras to help identify who is responsible for the thefts. Acts of vandalism have also been discovered on church grounds recently. Selwyn Harris/Pahrump Valley Times

Parishioners at Pahrump’s Heritage Bible Church on Homestead Road have a mystery on their hands and need help from the community to solve it.

Last week, for the third time, the church’s American flag was stolen from the polethieves.

“It’s the third time our flag was taken over the last couple of months,” she said. “It was stolen again last week, and they also broke our fence at the same time. We are going to have to pay more than $2,000 for the camera system. The sheriff’s office said they had no other reports of flags being stolen in the community.”

Wright said she and other church members are honored to fly the flag in support of veterans and the military.

“The first time it happened was during the elections last month and it’s still continuing,” she said. “Our church was wondering if other people have had the same occurrence happen but haven’t come forward to report it. We tried some different things but they are still taking them by cutting the ropes that hoist the flag to the top of the pole. We take pride in our American flag and we just end up having to replace them.”

Additionally, Wright said if someone in the community wants a flag, they need not resort to thievery.

“We are willing to give them a flag but there’s no need to steal,” she said. “The VFW Post on Homestead Road has been doing a flag exchange for years. In fact, if you have a torn or tattered flag, just bring it down and they will exchange it. We live in a very giving community and that’s what we are all about. If there’s a need, they should let us know.”

Besides the thefts of Old Glory, Wright also said area residents need to be aware of other thefts and instances of vandalism in the community during the holidays.

“I know some churches have had their nativity scenes vandalized as well as the ones on people’s property,” she said. “I have heard some Las Vegas residents have had their outside Christmas decorations stolen and or vandalized. This has been very concerning for our church.”