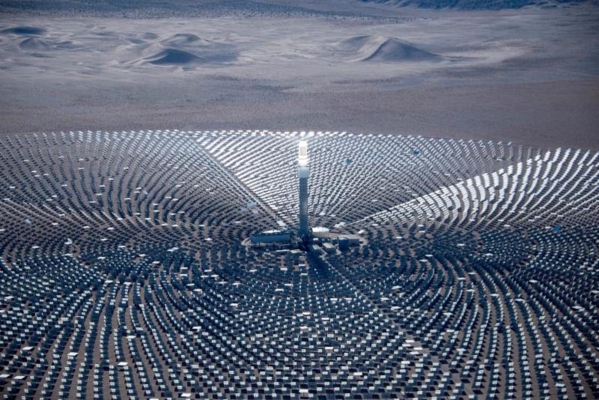 SolarReserve received one prestigious award and has been nominated for at least three others, according to the company whose plant near Tonopah continues to receive recognition for its forward thinking.

“The Solar Industry Awards are a global awards program that recognize the people, products and services that develop innovative approaches with the potential to change the way we live,” according to a SolarReserve spokesman.

SolarReserve’s proprietary “solar thermal technology with integrated energy storage” uses mirrors at its central Nevada plant northwest of Tonopah to focus sunlight to directly heat molten salt and then store it so electricity can be produced day and night – using only the sun’s energy with zero requirement for fossil fuel, the company says.

“This technology is able to compete head-to-head with fossil fuels.

“A key feature of this technology is a fully-integrated molten salt thermal storage system,” which often is visible from U.S. highways, Nevada state highways and local roads at times when the system is gathering energy.

“Environmentally friendly molten salt is the working fluid that both captures the sun’s energy and stores it until electricity is needed, even after the sun has set.

“Together with the SolarReserve technology design, the use of molten salt represents the most flexible, efficient and cost-effective form of large-scale energy storage available today. “The development of this technology brings additional benefits to local and global economies through the creation of jobs, greater energy security, cleaner environments and a healthier, more sustainable future for generations to come,” the company says.

In addition to the Solar Industry Award, the company has been selected as a finalist for the 2015 Platts Global Energy Awards in three categories, namely:

*Breakthrough solution of the year;

*Strategic deal of the year.

“Over the past 17 years the Platts Global Energy Awards have honored and recognized those who have transcended the status quo in the name of excellence in leadership, innovation and performance in the energy industry.

“Finalists were chosen from a pool of more than 200 nominations from over 25 countries,” a spokesman for the awards finalists said.

Winners of the awards will be announced at a black-tie celebration Dec. 9 at Cipriani Wall Street in New York.