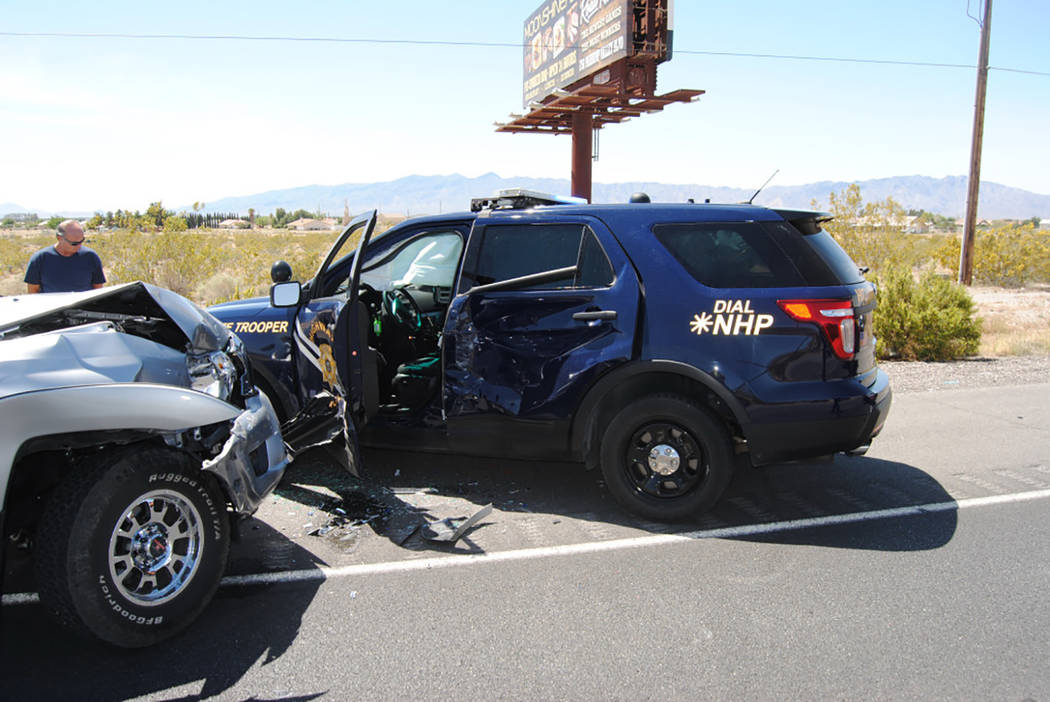 Special to the Pahrump Valley Times Emergency crews responded to a two-vehicle collision involving an on-duty Nevada Highway Patrol trooper just after noon last Saturday. While there were individuals who were shaken up, all declined medical transport from the scene, according to Pahrump Valley Fire and Rescue Fire Chief Scott Lewis.

Arson is believed to be the cause of a trash fire as area crews encountered a variety of service calls.

Pahrump Valley Fire and Rescue Chief Scott Lewis said crews responded to the area of Highway 372 near the former No To Abuse agency just after 5 p.m., April 19.

“Upon arrival, (the) crew found an outside rubbish fire,” he said. “Juveniles were seen in the area immediately preceding reports of the fire. It is under investigation and it appears to be an intentional act. It did not extend to the building.”

Roughly an hour later, fire crews were summoned to a two-vehicle collision at the intersection of Quarter Horse Avenue and Navajo Boulevard where minor injuries were reported, but all parties refused medical transport.

On Thursday, fire crews responded to a car versus pedestrian collision just after 1 a.m.

“This occurred in the area of 601 South Highway 160, where upon arrival we found a bicyclist versus vehicle,” Lewis said. “The bicyclist was injured as a result of the accident, however, they refused medical transport from the scene.”

“We were dispatched for a report of a motor vehicle accident along Highway 160 in the area of Gravel Pit Road,” Lewis said. “Upon arrival, we found a T-bone type collision involving an NHP trooper and a passenger vehicle. While there were individuals who were shaken up, all declined medical transport from the scene.”

On Monday, crews responded to an early morning collision on U.S. Highway 95 at approximately 1:30 a.m.

“This occurred in the area of mile marker 22 where it was reported to be an injury motor vehicle accident with entrapment,” Lewis said. “The accident involved a semi-truck and an SUV, where upon arrival, Medic 5 established command. They assisted with the extrication of one person who was subsequently flown out via Mercy Air 21. Two other occupants of the semi, I believe, declined medical treatment and transport. The cause of that accident is under investigation.”