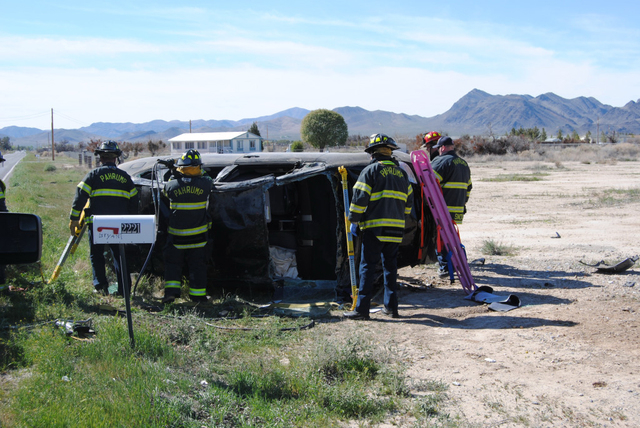 The first crash occurred Friday afternoon when a man was flown to UMC after losing control and rolling his sport utility vehicle.

The unidentified elderly victim trapped inside the vehicle when crews arrived, was traveling westbound along Basin Ave., near Leslie Road just before 3 p.m., when the rollover occurred.

Fire Chief Scott Lewis said out of safety concerns, crews first had to stabilize the vehicle before aid could be rendered to the man, as the SUV came to rest precariously on the passenger side.

“We did a scene and risk assessment, as the patient was unable to egress from the vehicle on their own,” Lewis said. “We upgraded the assignment to a rescue assignment and brought in additional resources.”

Once stabilized, crews were forced to remove the roof of the vehicle in order to free the driver.

The extent of his injuries, according to Lewis merited the man be transported to Las Vegas, via Mercy Air, which shut down traffic during the extrication process.

“The landing zone was established on Basin just west of Leslie,” he said. “The extraction was completed without incident. His injuries were significant enough to warrant flight.”

As of press time on Tuesday, the condition of the driver was unknown.

A second unidentified man was airlifted to UMC after crashing a motorcycle he was riding along Highway 372 near Charleston Park Ave. just after 8 p.m. on Saturday evening.

“It was a single-vehicle motorcycle accident where the victim was found unconscious in the roadway,” Lewis said. “Crews responded and provided patient care and transferred the patient to Mercy Air Base 21 for their lift to trauma. We’re not aware of any other vehicles involved in that accident.”

The degree of that man’s injuries was not disclosed.

Lewis also said aside from the two motor vehicle crashes, crews responded to the regular medical service calls throughout the weekend, as they normally do.

“There were a couple of calls to the park that were mostly related to medical, but it was nothing related to the actual balloon festival or any of the operations going on there.”