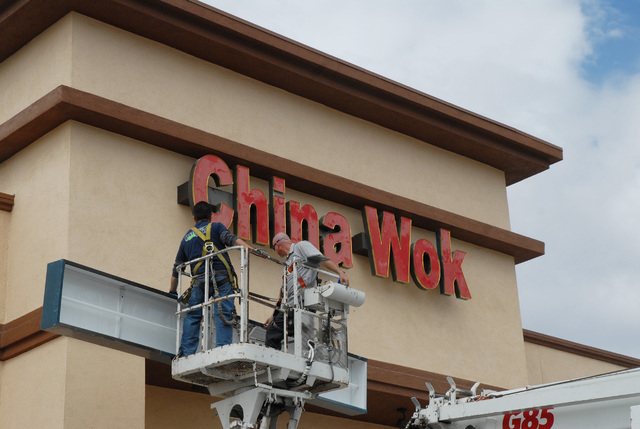 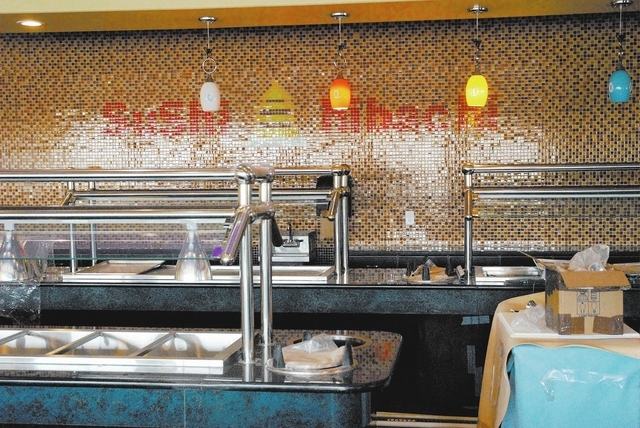 Two Pahrump eateries are working to get the doors open. One has entailed ground-up construction and the other extensive renovations of the dining room and an all-new kitchen equipment installation. Outdoor landscaping has also been addressed.

Jinfu “Jeff” Shao, owner of China Wok on Dahlia Street said he hopes to open mid-August. “If all the inspections go well, we expect to be open by then.”

Project contractor, Andy Jordan, owner of Serenity Homes, said the 9,400-square-foot building is almost completed. The signs were installed Monday morning. Jordan said, “We installed all the carpeting over the weekend. The only thing missing are the tables and chairs.” Dining space and banquet rooms will occupy 7,000 square feet.

Shao said the new furnishings will arrive this week.

The format for the newly-named China Wok Buffet &Grill will still have the hot and cold buffet items from the existing restaurant but will also offer a sushi bar and a hibachi grilling station.

Jordan said the sushi bar and hibachi are installed and ready to go.

Shao said the current China Wok offers limited sushi and his customers like it so well he decided to put a sushi bar in the new restaurant.

Shao said, “I’m still in need of a good sushi chef and a hibachi chef. The rest of the staff will come to the new restaurant as we close the other one.” He also mentioned needing a “good Chinese cook.”

Jordan has been building projects here for 20 years and owns the strip of business space where the current China Wok is located.

The take-out buffet will still be available but the price of sit-down dining will increase only slightly. The grill and sushi options will be included in the price of the buffet.

The sushi bar addition should be a big hit as the only place to get sushi here is Ohjah Japanese Hibachi &Sushi in the Pahrump Junction shopping center.

September 1 will be the grand opening for Sugar’s Shack Cowboy Steak House &Fried Chicken in the restaurant portion of the Stagestop, 100 Stagecoach Road, off of Blagg Road.

Sharlee Horvath and her dad Larry Chumley (owner of Mom’s Diner) partnered to open the new restaurant but Horvath said the two eateries are entirely different.

The two have renovated the interior, exterior and kitchen of the restaurant space leassed from Best Buy Products, which owns the Stagestop and provides gaming machines to various bars and other businesses here.

Horvath said, “The interior of the dining room needed to be cleaned up a little and we’ve installed new seating. It’s been painted and we added wainscoating and wagon wheel fixtures to add to the rustic feel.

“There was already an exterior entrance to the restaurant, but we’ve cleaned the look of it up and put in pavers and handrails to make it safer. We’ve also added a patio, however there is no outdoor dining space.”

She said the menu was completed as of Monday, and it is being double-checked before going to the printer.

Right now, the Stagestop kitchen is undergoing renovations and is closed until the restaurant opens. “We had to install all new equipment. The type of food they are serving isn’t what we’re offering and the kitchen needed to be rearranged to be more efficient,” Horvath said.

The details of the grand opening were not available but there will be live music, raffles and food.