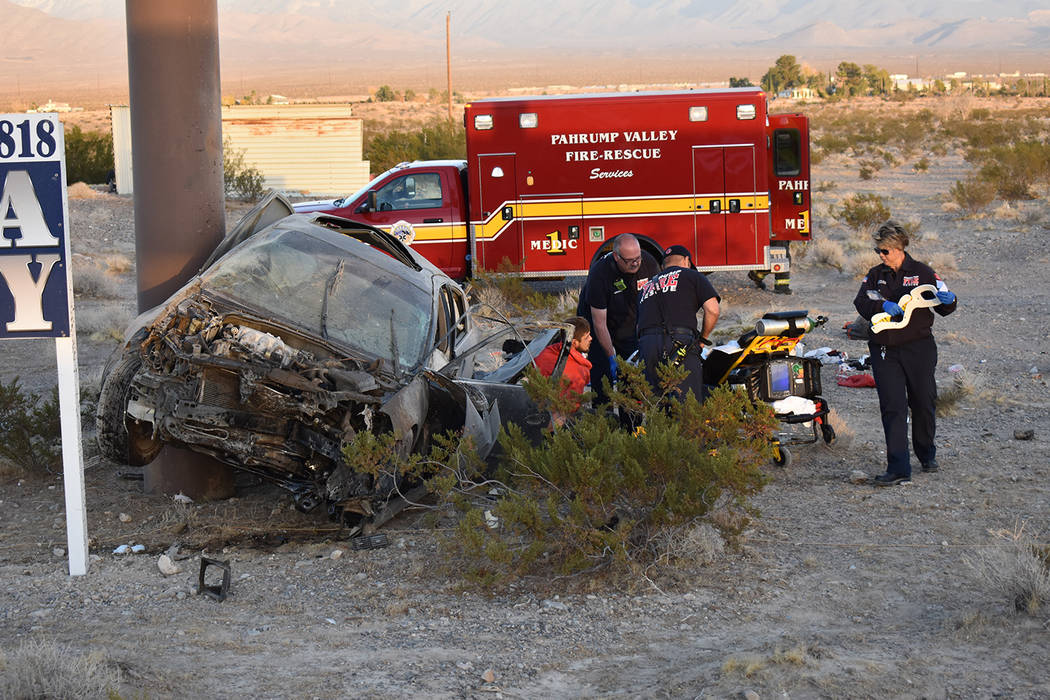 Special to the Pahrump Valley Times Two people were transported via Mercy Air to UMC Trauma in Las Vegas following a single vehicle rollover crash along Highway 160 at Mesquite Avenue on Sunday afternoon. Fire Chief Scott Lewis said both the driver and passenger, who were ejected from the car are expected to recover from their injuries. 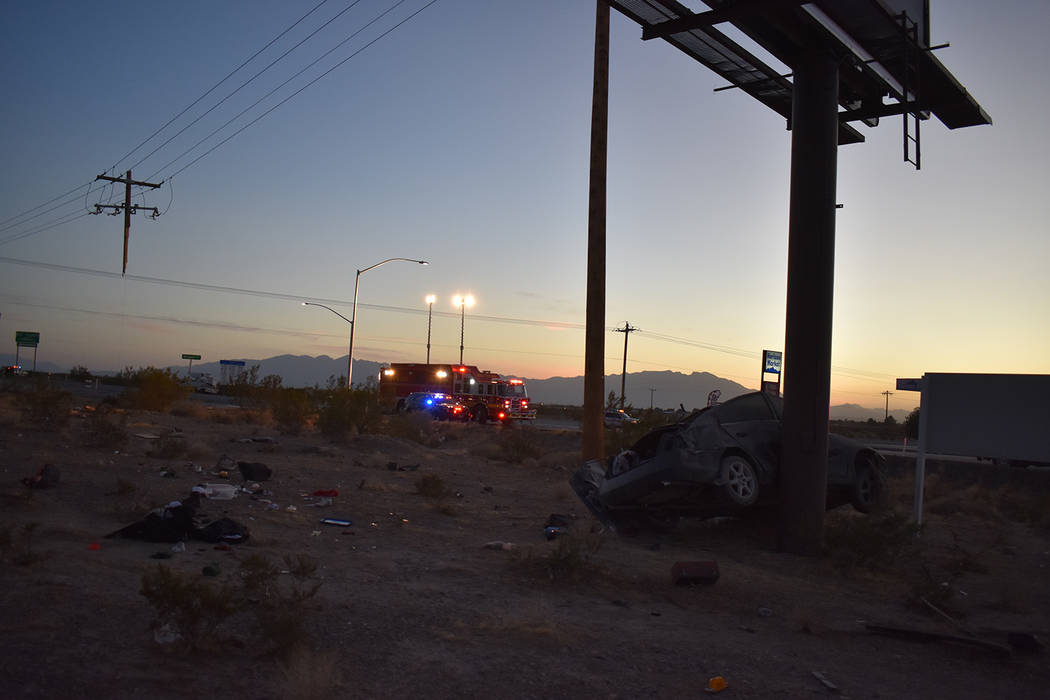 Special to the Pahrump Valley Times As the vehicle was barrel-rolling along Highway 160, Fire Chief Scott Lewis said the vehicle sheared and ultimately compromised a utility pole roughly one-third up from the top of that power pole. The remaining section was suspended only by the wires. Valley Electric Association crews were also summoned to the scene for repairs.

Two people were transported to UMC Trauma in Las Vegas following a devastating car crash along Highway 160 at Mesquite Avenue on Sunday, Dec. 3.

Pahrump Valley Fire and Rescue Services Chief Scott Lewis said NHP is investigating the exact cause of the 4 p.m. collision, where the vehicle impacted a power pole at a high rate of speed.

“Upon arrival, crews found a vehicle that had apparently barrel-rolled numerous times down Highway 160 and had compromised and sheared a utility pole about one-third from the top of that power pole,” Lewis said. “The remaining section was suspended only by the wires.”

Lewis also said that one occupant of the vehicle had been ejected, while the other occupant was partially ejected and eventually self-extricated from the car.

“There were significant injuries sustained to both parties,” Lewis said. “We attempted to fly both patients from the scene, however, the local airships were committed on other assignments at the time. One patient was later flown from Desert View Hospital to UMC Trauma in Las Vegas while the other was transported by ground to UMC Trauma.”

Also on Sunday, fire crews responded to a structure fire on the 3100 block of West Gally Road at 7:40 a.m.

“Upon arrival, crews found a building with an attached garage had been set on fire, in an apparent attempt to conceal a breaking and entering and theft of a motorcycle,” Lewis said. “Subsequent to that, a suspect of interest was arrested by the Nye County Sheriff’s Office. It is under investigation by not only the sheriff’s office but also Pahrump Valley Fire and Rescue Services along with the deputy state fire marshal.”

One person was transported to Desert View Hospital following a late Monday evening car crash on Highway 160 and Jenny Court.

The collision, described as a classic “rear-ender,” resulted in the transport of one person to Desert View Hospital with non-life-threatening injuries.

On Tuesday afternoon, Lewis said fire crews were dispatched to a mutual-aid assignment in Amargosa Valley for a two-vehicle collision involving a semi-truck and an SUV.

“Rescue 1 and Medic 2 responded, where upon arrival, they found an offset head-on type collision involving the two vehicles,” Lewis noted. “There was no entrapment, however one person was transported back to Pahrump to the local hospital. We also simultaneously had a motor vehicle accident at Highway 372 and Linda Street. That accident, resulted in one patient being transported to Desert View Hospital. There was no entrapment.”

Additionally, fire crews were summoned to the intersection of Highway 160 and Blosser Ranch Road for another two-vehicle crash late Tuesday afternoon.

Two patients were medically assessed but did not require transport.

Over the course of last week, Lewis and his crew responded to numerous additional structure fires, including the stove-top cooking variety fires.

Crews were also summoned to several electrical-related incidents that resulted in fires, along with several brush and grass fires during the course of last week.

All told, Lewis said Pahrump Valley Fire and Rescue crews have experienced an exceptional year in terms of overall emergency service call responses, as 2017 comes to an end in just a few weeks.

“At present, we are way up on our fire-related responses as well as the EMS side of the house,” Lewis noted. “We are looking at predictions of about 10,000 responses for this year. The average has been in the high sevens. We will wait and see if we break that 10,000 threshold. Things could calm down within the next couple of weeks, but at this pace, it looks like we are heading for that number.”

Despite the inordinate number of service calls, Lewis said, he and his crew are holding up pretty well physically.

“We’re trying to get as much rest as we possibly can in between our service calls,” he said. “Just through sound management of our responses, we are doing well.”