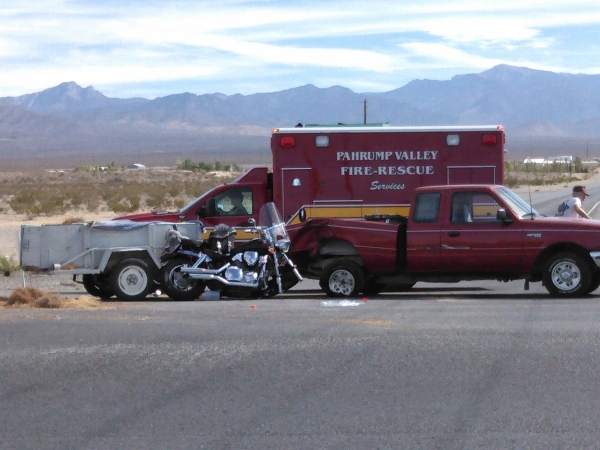 The first occurred at the intersection of 160 and Basin Avenue just after 8:30 a.m., when the rider lost control and dumped his bike on the highway approximately 50 feet from Basin Avenue.

“We were dispatched for a one-vehicle accident with the rider in the median,” said Chief Scott Lewis of the Pahrump Valley Fire and Rescue. “The bike actually traveled across the median from the northbound to the southbound lanes. The rider sustained injuries that were consistent for flight, however flight was unavailable. The patient was transported to the local hospital.”

The second wreck occurred just after 10:30 at the intersection of Highway 160 and Mesquite Avenue, where witnesses said the driver of a red Ford pickup truck hauling a trailer full of weeds pulled in front of the rider traveling northbound on the highway.

“The driver was heading toward the landfill and pulled out right in front of him,” the witness said. “The driver wasn’t watching what he was doing and the motorcycle rider broadsided him.”

Both north and southbound traffic along Highway 160 was diverted to side streets for more than an hour as crews worked to prepare the rider for transport.

The rider, who could be heard crying out in pain, was transported to Desert View Hospital.

The extent of his injuries by press time was unknown.