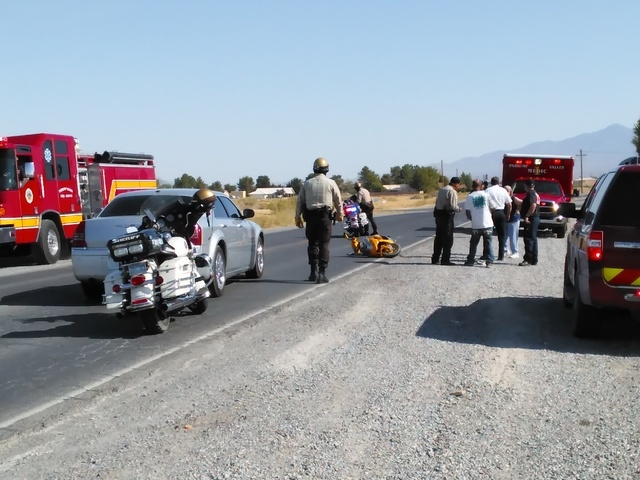 Pahrump Valley Fire and Rescue Services Chief Scott Lewis said upon arrival, the rider of the scooter complained of injuries to his upper extremities.

“They were transported to the local hospital and it is my understanding that they were then later taken to UMC Trauma in Las Vegas,” he said.

Later that day, fire crews were summoned to a structure fire along East Brian Street just after 8 p.m.

Upon arrival Lewis said his crews located the fire on the underside of the structure and commenced an attack.

“They attempted to utilize the existing exterior access points however, it was not accessible,” he said. “They then entered the interior of the home and cut an access hole in the foyer area and were able to halt forward progress and extinguished the fire with minimal damage to the structure. It is thought to be electrical in origin.”

Roughly two hours later fire crews responded to a report of another fire inside a trash container along West Maple Street.

“Crews found a trash container fire which had extended to a ground cover fire,” he said. “The fire was quickly controlled with no further extensions. It is undetermined as to what the origin of that fire was.”

One person was transported to Desert View Hospital following a two-vehicle collision at Calvada Boulevard and Dandelion Street on Thursday.

Lewis said a person was medically entrapped inside one of the vehicles, as crews arrived on scene.

“Crews extricated the individual and transported them to the local hospital.” Lewis said.

On Friday fire crews and sheriff’s deputies responded to the homeless camp behind the Pahrump Nugget after reports of a man who sustained a gunshot wound.

“Upon arrival, crews found a person who had not been shot by a firearm, but was shot in the groin with a BB gun,” Lewis said. “The crews also found several unauthorized burns in that location which required extinguishing. Crews were able to manage all of the issues without incident.”

On Saturday morning, emergency crews were dispatched to an off-road ATV crash in the area of Carpenter Canyon Road near Wallace Canyon.

Lewis said the location of the incident created a few challenges for responders.

“Crews found a seriously injured individual that a medical helicopter could not gain access to, due to the rough terrain and the inaccessibility,” he said. “Crews transported the patient in our specialized offroad four-wheel drive vehicle to a waiting ambulance at the bottom of the hill.”

The patient was then transported and transferred to Mercy Air-21 where he was flown to UMC Trauma in Las Vegas.

Also on Saturday, fire crews were dispatched for an injury motor vehicle collision at Blagg Road and Highway 372, where one person sustained injuries warranting transport to the hospital.

On Sunday, fire crews were dispatched to the 4000 block of Wilson Road for an unknown type of fire just after 11 a.m.

“While en route, it was identified as a fully-involved vehicle fire close to structures and other vehicles,” Lewis said. “Upon arrival, crews found the vehicle, which was well-involved. Neighbors were using garden hoses on the fire to keep it from extending. Fire crews extinguished that fire without extensions to the other vehicles and structures. That fire is still under investigation.”