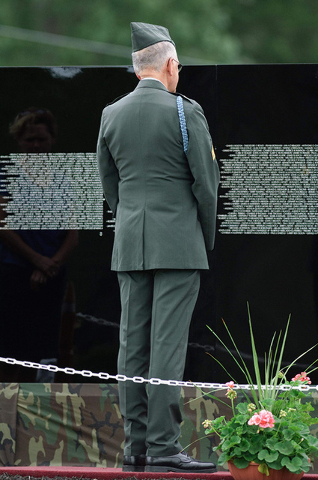 A veteran views the The Moving Wall during a stop in Tennessee. The half-size replica of the Vietnam Veterans Memorial will return to Pahrump in September for the Fall Festival. Vietnam Combat Veterans, Ltd./Special to the Pahrump Valley Times

The Moving Wall is scheduled to make a return stop in Pahrump in September to Simkins Park.

The half-size replica of the Vietnam Veterans Memorial in Washington, D.C. has been touring the country for more than 30 years.

Pahrump Chamber of Commerce CEO Chris Erwin said he and the board of directors agreed to bring the wall to Pahrump, just in time for the annual Fall Festival, scheduled from September 22-25.

Though the venue for the Fall Festival is Petrack Park, Erwin said the Moving Wall will be displayed at Simkins Park on the north end of town.

We found that for many veterans, its a very emotional time when they go visit the wall, he said. I really felt that by having it at Simkins Park it could be a bit more of a Memorial Park type of environment. We didnt want people at the wall paying their respects while at the same time theres a carnival atmosphere going on. We just didnt think Petrack Park was conducive of a proper memorial wall and environment.

There is a fiscal impact to get the wall to Pahrump. Erwin said it will cost roughly $10,000 for expenses.

To pay for the effort, a GoFundMe account has been established.

They are looking for business sponsorships, which he is handling, Erwin said of Frazier. I personally wanted to get our community involved, which prompted the GoFundMe account.

Each patriot who donates gets a commemorative T-shirt, a commemorative custom Challenge Coin, a commemorative lapel pin, a custom bumper sticker and also a hand-held U.S. flag, along with a red rose, which they will pick up at Simkins Park. The purpose for the flag and the flower is so people could leave it there at the wall.

Any commemorative item left at the wall will not be thrown out, Erwin noted.

The Vietnam Combat Veterans organization will actually collect all of that, he said. They are creating a museum in Michigan and all of the items that are left behind at the wall will be collected and used as part of their display at that museum.

There will be no admission price to see the wall, which Erwin said will be open by 2 p.m. on Thursday September 22, to 2 p.m. Sunday afternoon.

From the time that we open it, till it closes on Sunday, it will be open 24 hours, which is part of the conditions for bringing the wall out here, he said. Veterans tend to go when theres not a lot of foot traffic around. They like the wall open at all hours so they can go anytime.

As an added component for the task, Erwin said Pahrumps Home Depot applied for a grant to assist with bringing the wall into the community.

Volunteers from more than 13 Southern Nevada stores will build a 250 foot-long railing designed to elevate the wall.

Its shaped like a V that the wall sits on and there are braces that go into the grass to hold the wall up, Erwin said. The volunteers will help us out with landscaping and we are absolutely thrilled that a company like Home Depot would really jump in and help us out like that. They recently did work at the veterans section of Chief Tecopa Cemetery. They are a huge lifesaver and everyone at the Team Depot Foundation has been absolutely great.

Additionally, Erwin said between the GoFundMe campaign and 100 patriots fundraising drive, hes hoping to completely cover the expenses of bringing the wall to Pahrump.

Any profits earned from the effort, beyond expenses, will be donated back to community veteran organizations.

It will benefit the VFW and DAV, as well as VFW and DAV auxiliaries, Erwin said. Officials from the VA are coming out to provide information on PTSD for those warriors who may be suffering from it after they come back from a combat zone. This is a combination of the current tourism department, the DAV, the VFW and the chamber. We are also trying to get a lot of day-trippers that would come in to see the wall and possibly stop by the Fall Festival on their way home. There will be lots of things going on that weekend and its pretty exciting. We are all looking forward to it.

The wall displays the names of more than 58,000 Americans killed in the Vietnam War.