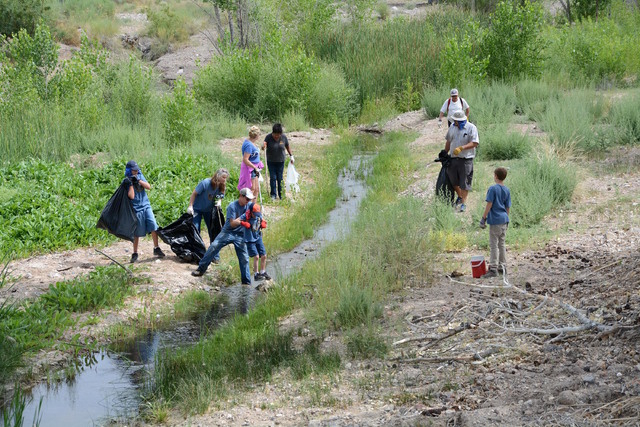 BEATTY — Three teams of volunteers gathered Saturday, June 11, to clean areas along the Amargosa River in Beatty and at the Nature Conservancy’s Torrance Ranch Preserve.

Some of the area covered will be in the first phase of the long-planned nature walking trail project planned by the Beatty Habitat Committee in cooperation with the Nature Conservancy, and will include land donated to the conservancy by Beatty businessman Ed Ringle.

“We had 25 volunteers and felt like this is a good beginning for the trails,” said Habitat Committee Chairman Ann Marchand in her report to the Beatty Town Advisory Board. Besides locals, including Boy Scouts, there were volunteers from Amargosa and Pahrump and from the Red Rock Audubon Society.

She also said that Beatty Water and Sewer District Manager Rob Shirley has submitted a proposal to the Nevada Department of Environmental Protection to allow the district to work on the trail project in lieu of fines previously levied when sewage was directed into the river bed.