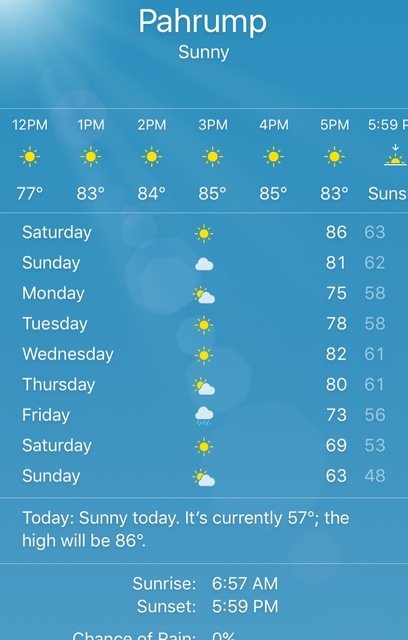 After a breezy week in the valley, warmer temperatures and calmer conditions will be in place just in time for the weekend.

A weather system that will move into place this weekend will send temperatures above seasonal averages, according to the National Weather Service.

“What we’re looking at is high pressure moving in over the weekend that’s going to bring our temperatures back up a little bit above normal,” said Todd Lericos, National Weather Service meteorologist. “We’ll be hovering around the five-to-nine-degree-above-normal range.”

Sunny conditions will allow for temperatures of 85 today and 84 on Sunday with no real wind factored in.

Temperatures will drop as the start of the work week rolls around. Highs of 74 degrees, 75 degrees and 77 degrees are expected for Monday, Tuesday and Wednesday respectively.

Lericos explained that weather should remain calm in Pahrump for the first part of the week, with mostly sunny conditions persistent throughout.

“It looks like a pretty good early part of the week,” he said. “We’re really not expecting another system to affect the area until later in the week.”